This traditional homemade stuffing recipe is a classic. It’s an easy, traditional stuffing made with simple ingredients to make for a Thanksgiving turkey, or served as a side dish to chicken, pork, or just about any comfort food craving any time of year.

The one dish I wouldn’t want to miss out on at Thanksgiving is this super simple, totally basic, bread stuffing I’ve been eating since I could put food in my hungry little mouth, and will still eat hot at the table or cold straight from the fridge. It’s my side dish kryptonite and the one I can never say no to.

I’ve shared other stuffing recipes that are more unusual with more ingredients, but I’ve never shared my favorite. I always thought it was just too basic, and not unique enough. But because it’s the same one I make year in and year out, and it’s the same easy stuffing recipe my mom made every year that I would more than happily taste test for seasoning, I figured it was high time to post it here where it proudly belongs. 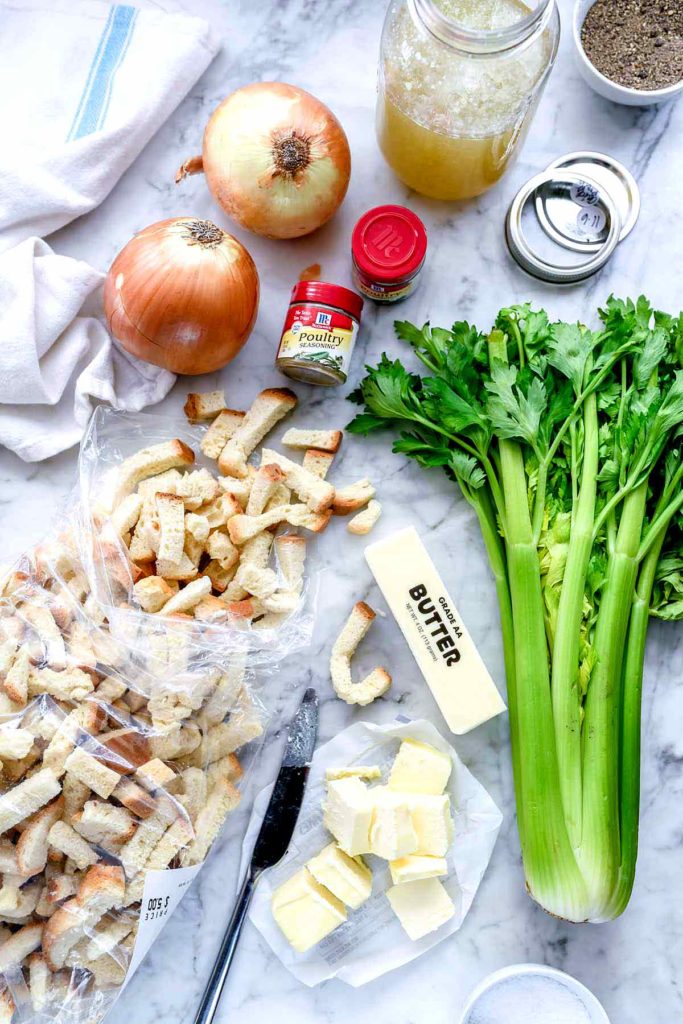 There are only six ingredients, plus salt and pepper in this super easy stuffing recipe.

The best Thanksgiving stuffing recipe starts with basic dried sandwich bread. Dried bread does the best job of absorbing the seasonings and flavors.

The thing that makes Thanksgiving stuffing so good is the combination of onions and celery sautéed in plenty of butter. Just the aroma of these three ingredients sautéing on the stove is enough to send visions of turkey day memories flooding through my brain like a food memory time capsule.

In all, here’s what you’ll need to make this bread stuffing recipe:

This is one time of year and the one dish I don’t skimp on the butter because it adds loads of flavor.

I season the stuffing the same way my mom always did, with dried poultry seasoning. My stuffing seasoning is a combination of the following dried herbs: 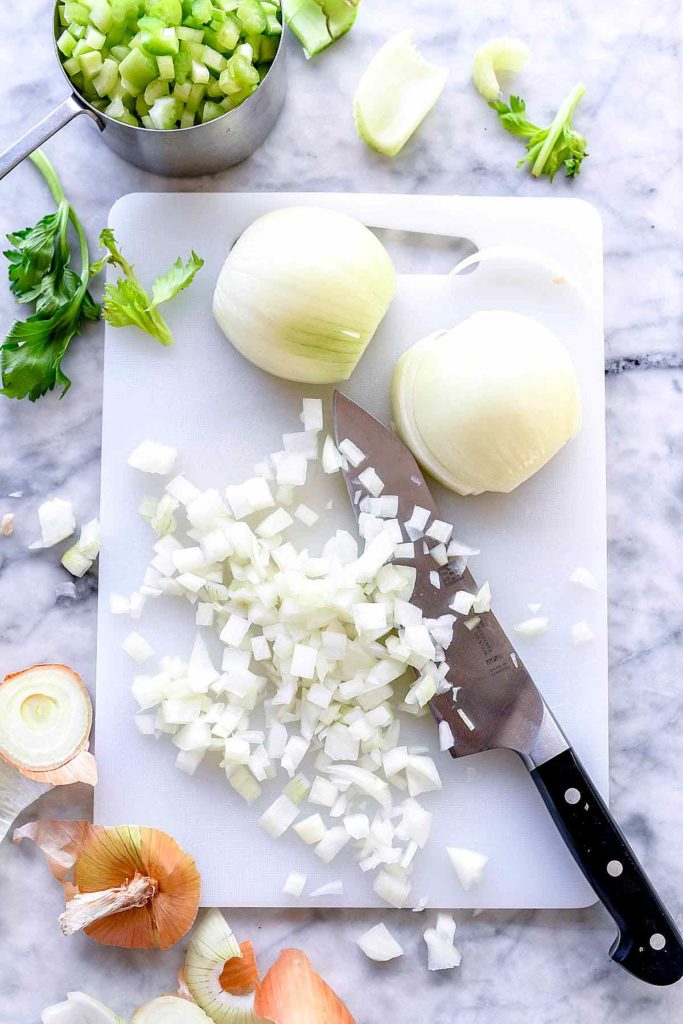 How to Dry Bread for Stuffing

My mom always used boxed seasoned bread cubes, but I have fallen into favor of the dried bread cubes I purchase from my grocery store bakery. Or, you can make your own. A one-pound loaf of bread will make about 12 cups of cubed bread.

To prepare dried bread for stuffing, cut a loaf of white or French bread into 1/2-inch slices and place on a baking sheet or rack to sit out overnight, or for two night, until dried. Cut into smaller pieces if desired.

To prepare bread stuffing in the oven, place the sliced bread in a 225°F oven for 30 minutes or until dried, and cut into smaller pieces. 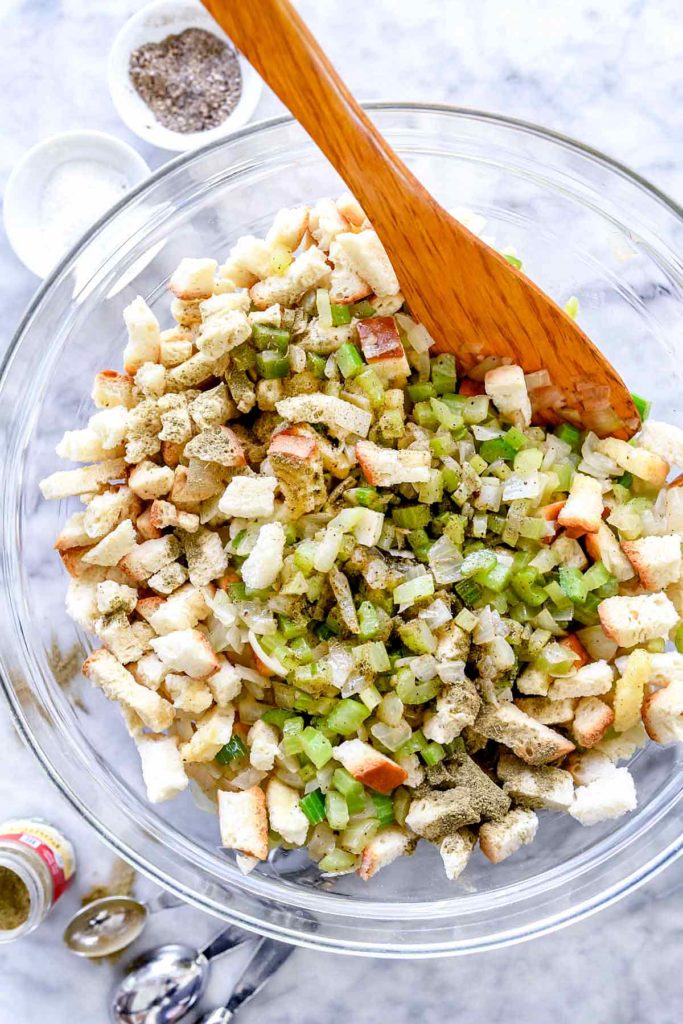 How to Make Stuffing

This truly is the best Thanksgiving stuffing recipe. To make it, simply melt the butter in a skillet, then add in the chopped onion and celery and cook until softened.

Add the dried bread cubes to a large mixing bowl along with the sautéed veggies. Drizzle with chicken broth and sprinkle with stuffing seasoning. Toss to mix, then bake either inside the turkey or in a baking dish.

The Best Temperature to Cook Stuffing

Stuffing cooked outside the bird: To be sure there’s no contamination for your stuffing, cook it in a baking dish prepared with butter as noted in the recipe instructions below. When cooking outside the bird, drizzle with ¼ cup more stock and dot with 1-2 tablespoons more butter, so the stuffing doesn’t dry out in the oven. Bake covered with aluminum foil.

This traditional stuffing recipe can be the building block base to all your stuffing cravings by adding other ingredients to take it from simple to special:

How to Keep Stuffing Warm

Thanksgiving stuffing is one of the first side dishes to cool down once it’s been removed from the oven (bread just doesn’t hold heat well).

To keep this traditional bread stuffing warm until you’re ready to serve it, cover it tightly with foil and place it in the drawer underneath your oven (it should be fairly warm in there if your oven is still on), or in a 200 degrees F oven.

How to Reheat Stuffing

You can reheat leftover Thanksgiving stuffing on the stove or in the oven. Simply drizzle a tablespoon or two of broth over the stuffing, then either heat in a skillet on the stove or cover with foil and cook in a 350 degree F oven. 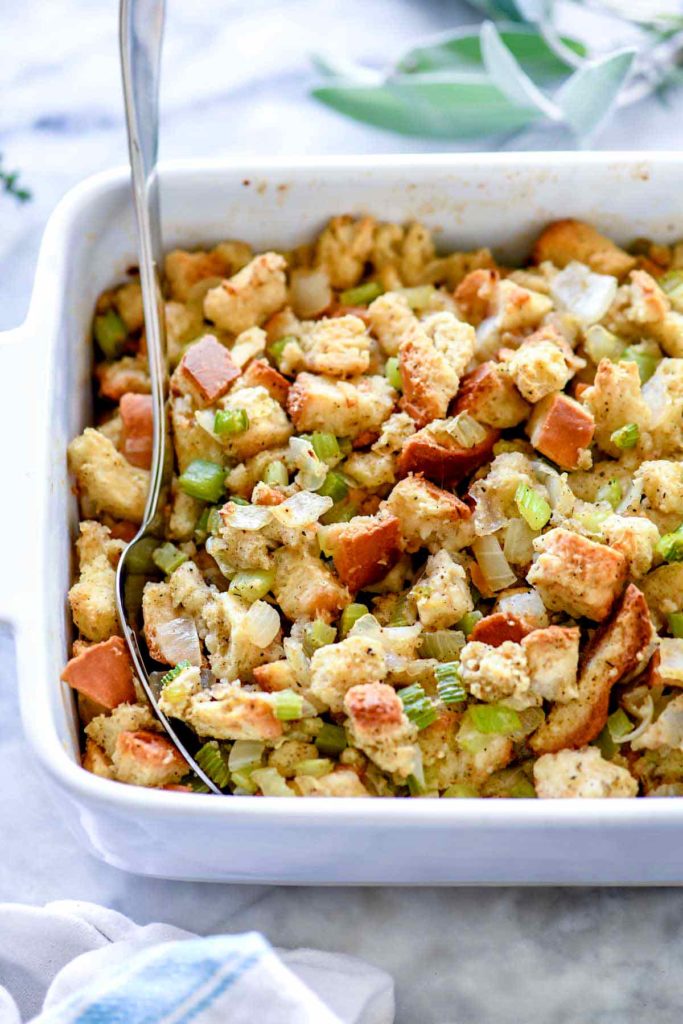 Tips for Making the Best Stuffing

The pungency of dried herbs is stronger than fresh herbs, and that’s why I use poultry seasoning every time. Plus, using dried herbs I already have in my pantry means there’s one less Thanksgiving ingredient I need to stock up on.

I like to make my own chicken or turkey stock to flavor this homemade stuffing recipe, and use for making my homemade gravy. I use my recipe for Homemade Chicken Stock.

If I’m making the stock recipe for turkey, I usually sub in the carcass after making my juicy roasted turkey breasts (because I always want extra white meat) and a few roasted turkey wings. Or, simply use chicken stock for turkey stuffing instead.

What to Serve with This Stuffing Recipe: My Thanksgiving Dinner Menu

If you make this recipe, please let me know! Bookmark this recipe and leave a comment below, or take a photo and tag me on Instagram with #foodiecrusheats 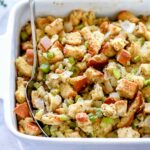 Keep it basic or doctor it up, make this stuffing inside or outside the bird for an easy side dish everyone loves. 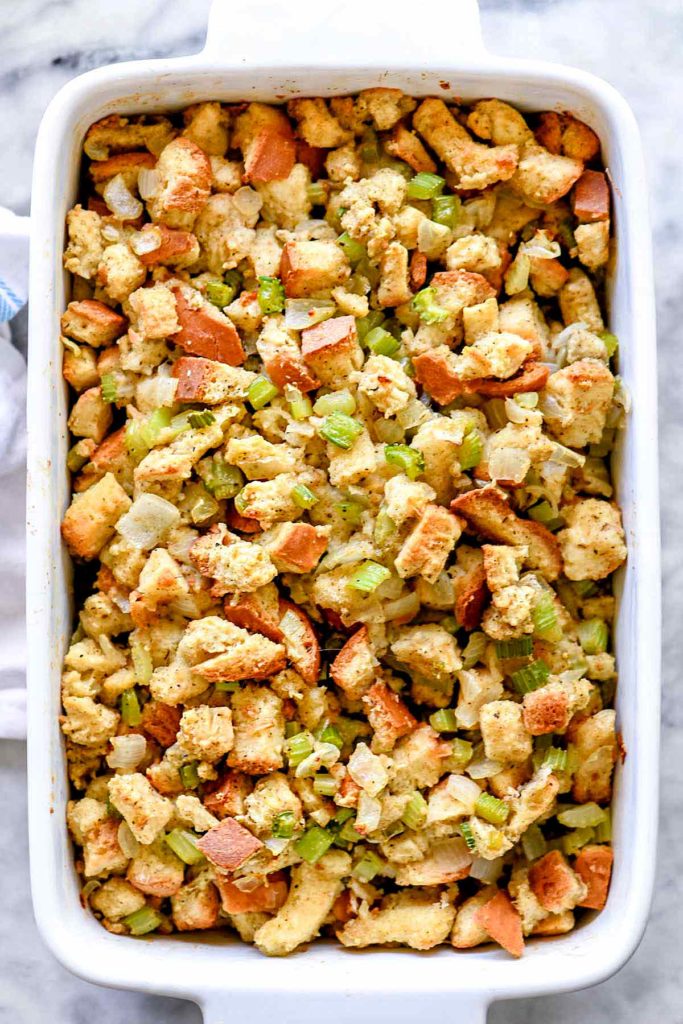 Main Dishes to Serve with Stuffing

Are you a basic stuffing fan or do you like it best with more stuff added to the mix? Leave a comment below and tell us your favorite stuffing to make now.

Are you team Mayo or team Miracle Whip? However yo

Perfect for easing into the week, this creamy bean

Getting in the local beefsteak tomato harvest with

Unlike the stuffed zucchini boats recipes whose ma

This is the salsa/salad/dip that just keeps on giv