As a gluten-free option to grains, and as a part of healthy meal prep, this is how to cook quinoa like pasta so it’s light, fluffy and cooked perfectly tender every time.

In this era of eating more superfoods, quinoa is a fantastic way to get loads of healthy plant-based protein.

“While no single food can supply all the essential life sustaining nutrients, quinoa comes as close as any other in the plant or animal kingdom.” Now that’s a pretty head statement to make! But quinoa lives up to its hype.

Quinoa is quick to cook, but when I followed the popular method of cooking it like rice, I found myself adding more and more water because it wasn’t cooked through, but when I added more water, it would turn mushy and gloopy. That’s when I discovered that when I boil it like pasta, it comes out perfect every time.

Ready in just about 15 minutes, quinoa keeps well in the refrigerator for about a week, making it perfect for meal prep and batch cooking to add to salads, grain bowls, soups, chilis, and stews or served on the side with grilled veggies and meats.

Quinoa is one of my favorite vegetarian protein sources, probably because it’s so unassuming. Like a seventh grade girl, it takes on the flavors it’s paired with but has a whole lot of power ready to bloom in the shadows.

I first heard of quinoa—and commonly mispronounced it—25 years ago when I was the art director for a health food magazine. Back then you could only find it in hippie dippie health food stores. Now, it’s seen everywhere including restaurants, cafés, and your neighborhood grocery store.

Known as one of nature’s superfoods, quinoa (KEEN-wah) is a carbohydrate that’s extra rich in protein, dietary fiber, B vitamins, and dietary minerals. Technically a seed, quinoa is a gluten-free nutritional powerhouse that bears the distinction as one of the few whole grain plant foods to contain all nine essential amino acids, making it a complete proteins comparable to red meat, poultry, fish, eggs, milk, cheese and yogurt.

Why Quinoa Is Good for You

In fact, 1 cup of quinoa provides twice the protein plus about 5 grams more fiber than the same amount of cooked white rice, making it a favorite plant-based protein for vegetarians and vegans. As a combo carb/protein, it fills you up faster and sticks with you longer.

With 8 grams of protein in each cup, quinoa is high in fiber, magnesium, iron and antioxidants, and an optimal protein source for plant-based, vegetarian, and vegan diets.

It’s prepared and eaten like a grain and is a popular choice for healthy diets in everything from breakfast bowls to salads and chili.

As an ancient grain, quinoa has been farmed by the Incas in the Andes mountains for thousands of years and produced over 120 varieties. These days, quinoa is found at most any supermarket with the most common types being white, red, black, or as a mix.

The three varieties are mostly similar in their nutty taste with white quinoa being the most mellow and neutral tasting of the three, and red and black quinoa tasting somewhat earthier.

No matter which variety of quinoa you choose, the cooking method is the same for all three to be ready in about 15 minutes.

Conventional teachings instruct the home cook to prepare quinoa the same as rice, in portions of two parts water to one part quinoa that’s brought to a boil, then covered and simmered until done.

Of course you can follow this method, but I rarely find success. I end up running out of water, then adding more until the quinoa is tender, and ending in a gummy mess.

That’s why I use a different cooking method and cook quinoa just like pasta:

Quinoa is often sold pre-washed, but if you’re not sure, it’s safest to rinse and drain it in a colander before cooking to remove it’s natural coating which can taste bitter.

If you prefer an even deeper nutty taste, toast the quinoa in a dry fry pan for 2-3 minutes or until fragrant before boiling. 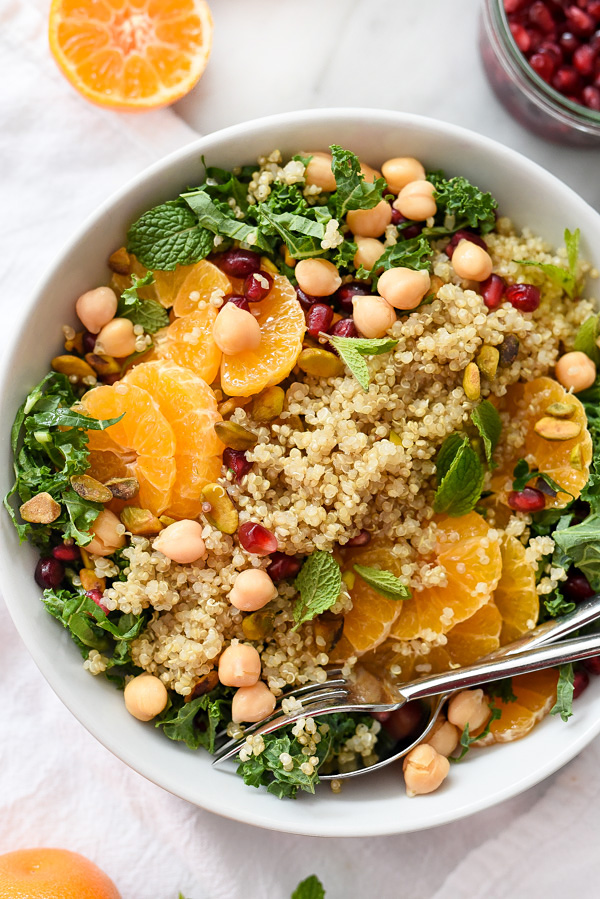 How to Tell When Quinoa Is Done

You’ll know quinoa is done cooking when it becomes slightly transparent and the seeds pop open so the quinoa’s “tails” appear and the seeds have a tender bite when tested.

Quinoa takes on the flavors it’s paired with so adding other ingredients to it while cooking infuses it from within. Here’s a few ideas:

Recipes With Quinoa to Try Now

Serve as a side dish or vegetarian main when you make it in the recipes below.

How to Cook Perfect Quinoa

Instead of cooking quinoa like rice, boil it in water like pasta then drain and return to the pot for a tender, fluffy quinoa bite every time.
Course Side Dish
Cuisine American
Keyword quinoa
Prep Time 2 minutes
Cook Time 10 minutes
Total Time 12 minutes
Servings 6
Calories 104kcal

1 cup dried quinoa yields 3 cups cooked quinoa. To add more flavor, cook the quinoa in broth, or half broth and half water. Or, add a smashed garlic clove to the water while boiling, then discard.  The quinoa will last 4-5 days in a sealed container in the refrigerator.