Growing up my family didn’t do many baked breakfasts. We weren’t the pancake or waffle crowd, it was more bacon and eggs for us.

So when we head for our friend’s mountain cabin, it’s all about what we’re going to eat. Dutch Babies is a traditional breakfast that my friend Sherrie has made for her kids for years, and once I got a taste of it’s sweet but custardy goodness, it was like a whole new world appeared.

The puffed pancake with crispy edges rounding out the eggey-custard-gooey-ness, with a light sweetness from a sifting of powdered sugar and a tart note from fresh squeezed oranges (or lemons if you like it tart) is a must-have whenever we head to the hills. 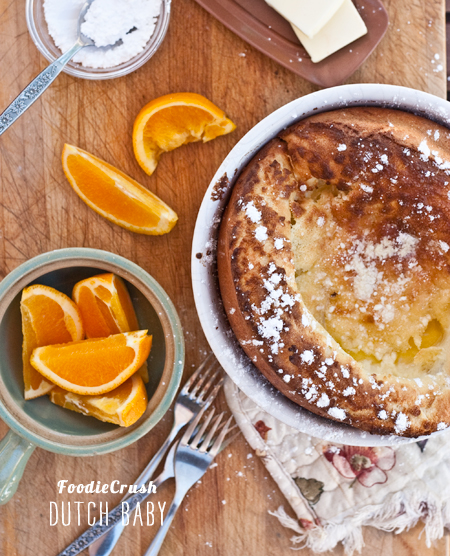 Sherrie combines her egg mixture in a blender, and depending on how many she’s cooking for, will use a cast-iron skillet, a 9 X 12 casserole dish or sometimes a Corning baking dish. It doesn’t matter so much what you bake it in, just make sure that you pre-heat the baking dish and butter in the hot oven before adding the batter—so that when you add the batter it sizzles a bit and has a head-start in crisping up.

When right out of the oven, the Dutch Baby looks like a giant popover but will deflate after it sits for a couple of minutes. Don’t worry, you didn’t mess up, it’s supposed to come back down to earth. 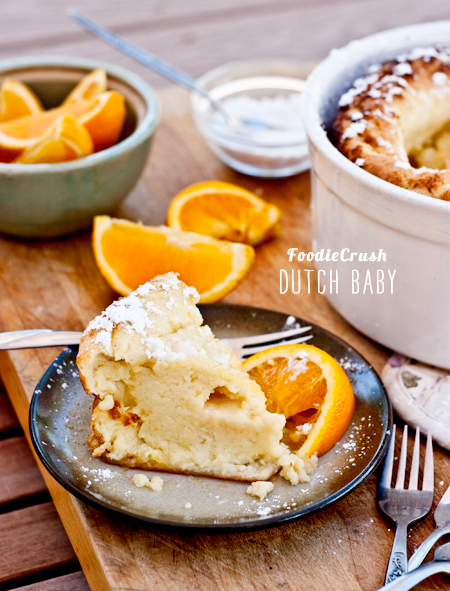 A couple of Dutch Baby tricks I learned from an old issue of Cook’s Illustrated:

And now for a few variations: 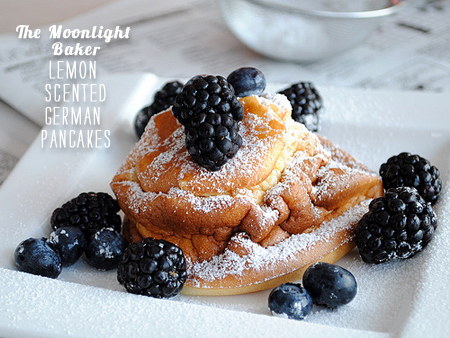 On a smaller scale than the tradtional Dutch Baby, The Moonlight Baker‘s Lemon Scented German Pancakes topped with blueberries and blackberries are similiar in texture and flavor, but portioned for one. The secret to Kim’s recipe? Fresh ingredients so the simplicity shines through. 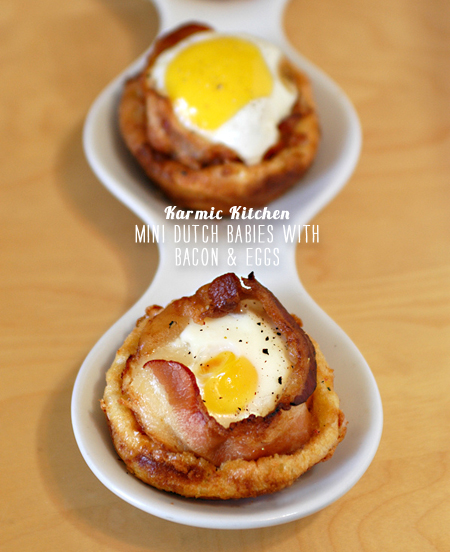 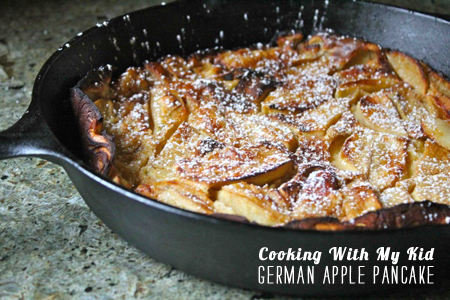 photo > Cooking With My Kid

Cooking With My Kid’s German Apple Pancake is the perfect example of Rebecca’s knack for creating tasty food kids are begging to try thanks, to the custard-egg-flavor topped with sweet apples and powdered sugar. And maple syrup of course.