The combination of soaring temperatures and farmer’s markets leads me to one conclusion. It’s time for gazpacho. With sweat-drenched home cooks and their ovens and stoves going on strike, it’s that time of summer when a no-cook meal is in order.

I love gazpacho. I’ve made it with a variety of veggies gleaned from the garden (and sometimes from cleaning out the fridge) but this time around I wanted a gazpacho with a little kick. Hello…bloody mary anyone? 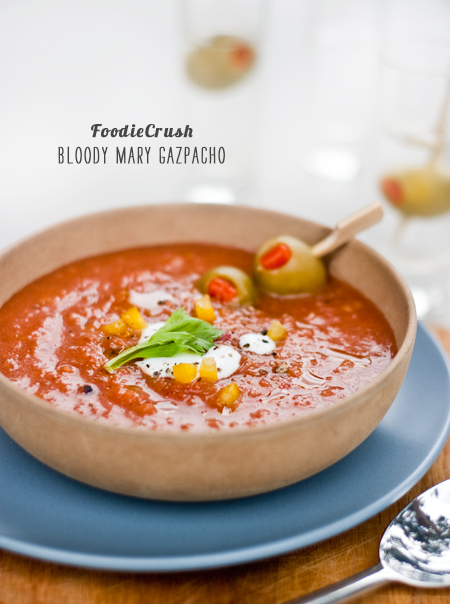 It was a very natural transition. Afterall, gazpacho require manys of the same ingredients as a great bloody mary. All that’s needed is some heat, a little Mary spice and wa-lah! BM in a bowl. And if you’re feeling particularly dandy or serving it for brunch, throw in a shot or two of vodka for a little bloody buzz.

In a medium size mixing bowl, combine first 6 ingredients. In a blender, pulse half of ingredients in bowl until smooth. Pour pulsed mixture into a large bowl. Add the rest of the batch to blender and pulse until chunky, you’ll want it this portion to be somewhat chunky for texture. Add to the smoothly blended tomato mixture. In another bowl or 4 cup Pyrex measuring cup, combine tomato juice and next 8 ingredients. Pour into large bowl with tomato mixture and combine. Chill for 1 hour for flavors to combine or eat at room temperature. Garnish and serve.

Gazpacho is super versatile, and doesn’t always include tomatoes and can be whatever color its base is. Try one of these variations (cherry? almonds?) from some of our favorite food bloggers. 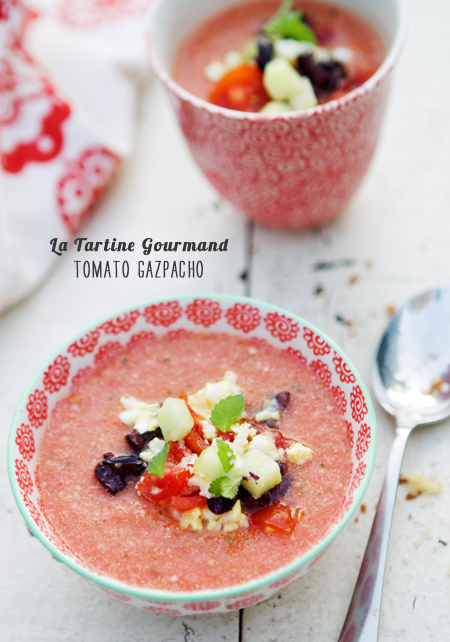 Reliving the traditions of her French roots, Bea’s philosophy of eating veggies and fruits in season, and when at their freshest stage possible, makes La Tartine Gourmande‘s Tomato Gazpacho  especially lively and satisfying as a main course, appetizer or amuse-bouche palette cleanser. 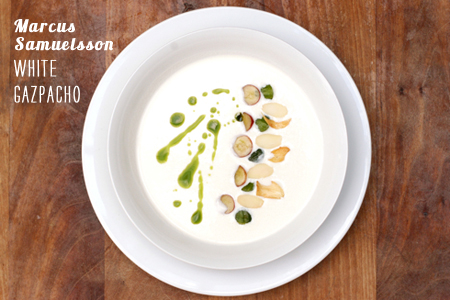 Marcus Samuelsson’s hunt for the world’s best restaurant found Chef Jordan Frosolone, of New York City’s August Restaurant, and his White Gazpacho recipe. It blended creaminess comes from blanched almonds, creme fraiche and whole milk and with the added punch of cucumbers and grapes, the hit of chile oil offsets its cool creaminess. 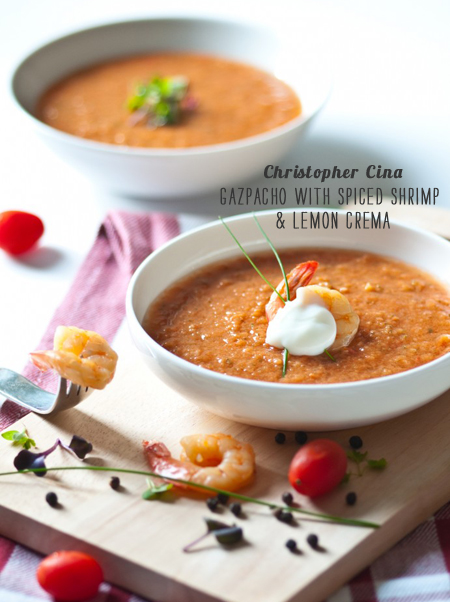 Along with sharing the secret to perfectly cooked shrimp (you’ll have to click the link to find it out) Chef Chris Of Christopher Cina ‘s Gazpacho with Spiced Shrimp, Lemon Crema is a classic tomato gazpacho with a kicked up garnish of spiced shrimp. And don’t forget the crema. NEVER forget the crema! 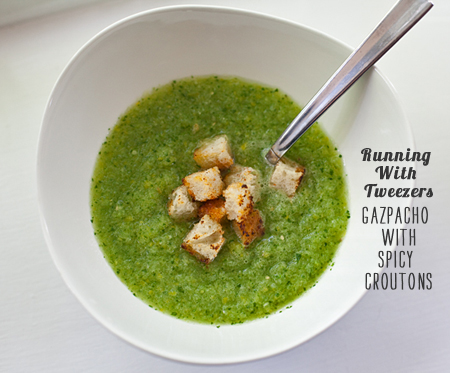 Throwing a contemporary spin on classic gazpacho, Tami combines tomatillos, watercress and cilantro with cucumber an yellow bell pepper (green although the right color might wouldn’t be mellow enough) for Running With Tweezers Green Gazpacho with Spicy Croutons (or as I like to call it: a green goddess love fest with a smokey crunch.) 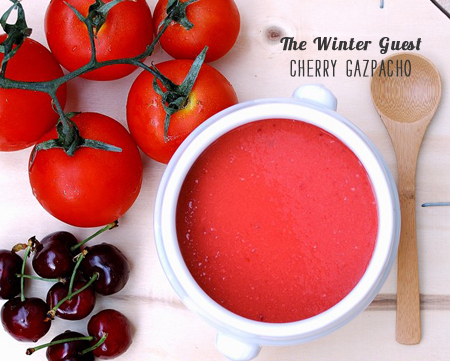 That’s the beauty of tomatoes. They tend to complement nearly every other red fruit (think watermelon and strawberries), but when I discovered The Winter Guest‘s Cherry Gazpacho I realized there’s a whole realm, cherries, that I’d never known! And as Miriam suggests, nothing is better than enjoying to enjoy a nice cool gazpacho in the summer heat.