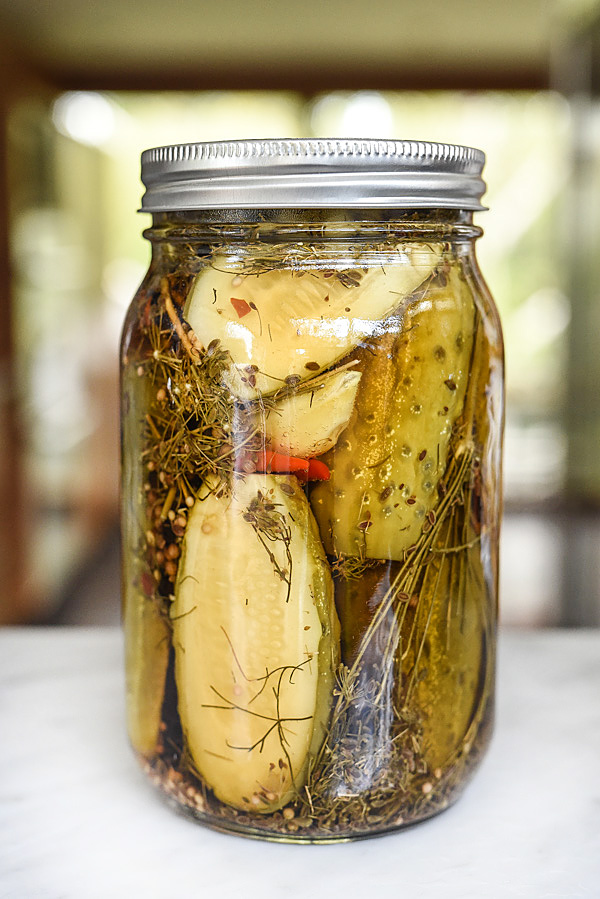 Every summer I make plans to can a few jars of spicy garlic pickles to match the taste of a jar I picked up at one our farmers markets that left me slack jawed and puckered. Because as a self-professed pickle-head, I always want more.

Those farmers market pickles were spicy. And dilly. And totally amazing. I mean, if you’re going to do it, do it big. I’m a self-professed pickle loving queen, as evidenced by my recipes for spiralized refrigerator quick dill pickles and my zesty bread and butter pickles. I love them all, don’t make me choose.

This spicy pickle recipe matches everything I crave about a spicy pickle: Garlic, dill, and a little bit of heat with a whole lot of crunch. It’s based on a recipe I heard about on NPR’s All Things Considered Lost Recipe series. The listener wanted to recreate her aunt Minnie’s secret pickle recipe, but only had a few details to go by. To reverse engineer the recipe, NPR turned to no other than the doyenne of canning on the www, Marisa of Food In Jars, who supplied some very helpful intel for pickling pickles, and the base for this homemade dill pickle recipe. 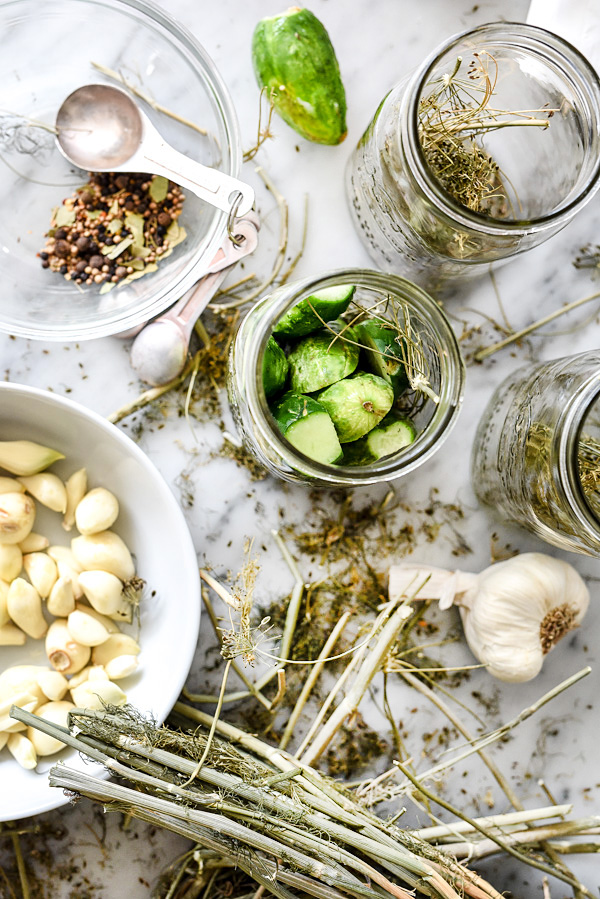 What’s in These Homemade Dill Pickles?

With garlic and Thai chili peppers added to the brine, these dill pickles have a spicy kick. And they’re exceptionally flexible to fit your taste. Can them so they last for months or make them refrigerator pickles to eat quicker. Feel free to leave the chili peppers out if heat isn’t your thing. If your cucumbers are bigger, cut them down to fit. Or, if you really love the vampireness of garlic, toss more in, or leave it out.

Ingredients for the spicy pickles: 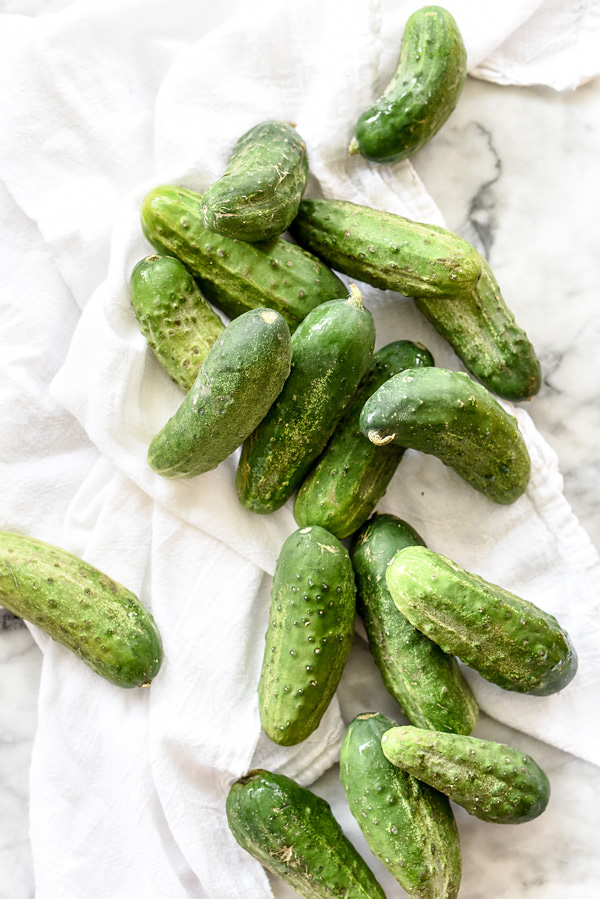 What Type of Cucumbers Are Best for Pickling

Choose firm, green cucumbers that don’t have a lot of blemishes or discoloration.

For canning cucumbers, choose a sturdier cucumber with thicker skin like kirby pickles that will hold their snap after brining in the vinegar solution.

Which Vinegar is Best for Dill Pickles

There are so many different types of vinegars out there, and while I love apple cider and rice wine vinegars for certain types of pickles, when it comes to dill pickles, distilled white vinegar is your pal. It’s a more mild smelling and flavored vinegar, has an ideal level of acidity, and since it’s clear, it won’t turn your pickles a funky color.

I use half cider vinegar and half white vinegar for a delicious tangy pucker.

Plus, there’s a good chance you already have this vinegar hanging around your kitchen (it’s a workhorse – great for baking when you’re in a pinch and don’t have any buttermilk, great in ranch dressing, and it’s an excellent multipurpose cleaner)!

How to Make Homemade Pickles Crisp

Small, firm cucumbers (kirby or “pickling cucumbers”) are key, and you want to can them as quickly after you buy them as possible. These young cucumbers have fewer seeds and contain less water, so their flesh is already nice and firm.

I haven’t experimented with this, but I’ve read you can soak your cucumbers in an ice bath for 20-30 minutes or up to overnight, before canning, to also help the cukes retain their crispness. If you’ve tried this before, definitely let me know!

How to Make Homemade Pickling Spice

This recipe starts with the homemade pickling spice mixture suggested by Marisa in the NPR segment, with some slight alterations. I cut down on the amount of allspice and I left out the red pepper flakes since I knew I was going to be adding whole, split Thai chiles for heat.

Ingredients for the pickling spice blend: 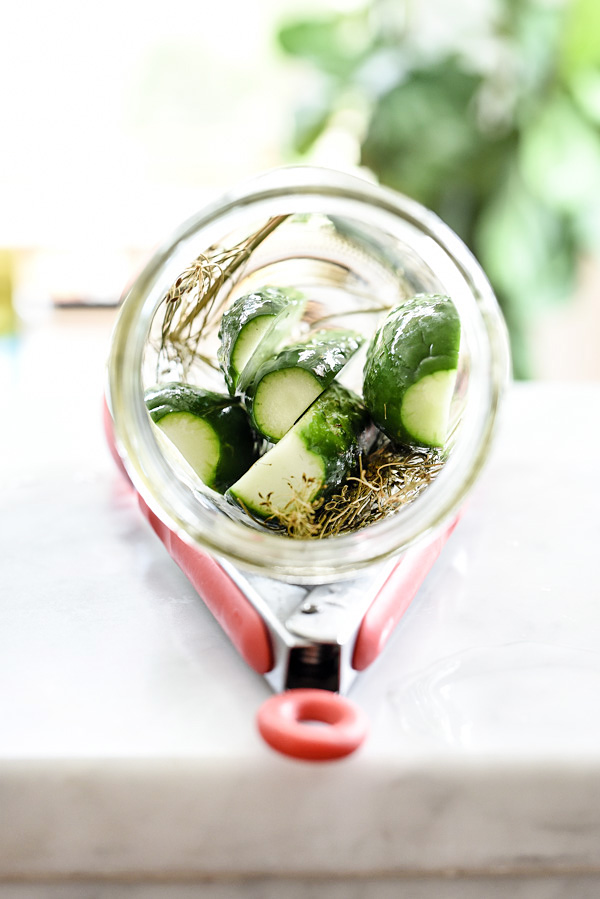 How to Make Dill Pickles

First, prep the pickling jars. Wide mouth mason jars that are easy to stuff are essential for canning pickles. If canning, sterilize the jars and lids by running them through the dishwasher or boiling in an extra large pot of water for 2 minutes per jar. If you’re not canning the pickles, simply wash and rinse the jars and lids in hot water.

Start stuffing and packing the jars. To each jar, add a few tablespoons of the pickling spice, 2 or 3 fronds and stalks of dried dill weed, 2 or 3 Thai red peppers, and a few whole garlic cloves. Then, pack the cucumbers (whole or sliced) into the jars so they are tight but aren’t damaged in the process.

PICKLE PACKING TIP: To easily pack the jars and keep the cucumbers from tipping over as you do, tilt the wide mouth canning jars at an angle on tongs. Then, pack the jars in layers of cucumbers and dill. Stuff away, pickler!

Add the brine. Next, bring the vinegars, water, and salt to a simmer in a large stock pot. Pour the brine over the cucumbers in the jars, leaving about 1/2 inch headspace.

Tap to release air bubbles. Tap the jars on the counter to release any air bubbles between the brine and pickles then top with the lids and screw tight. 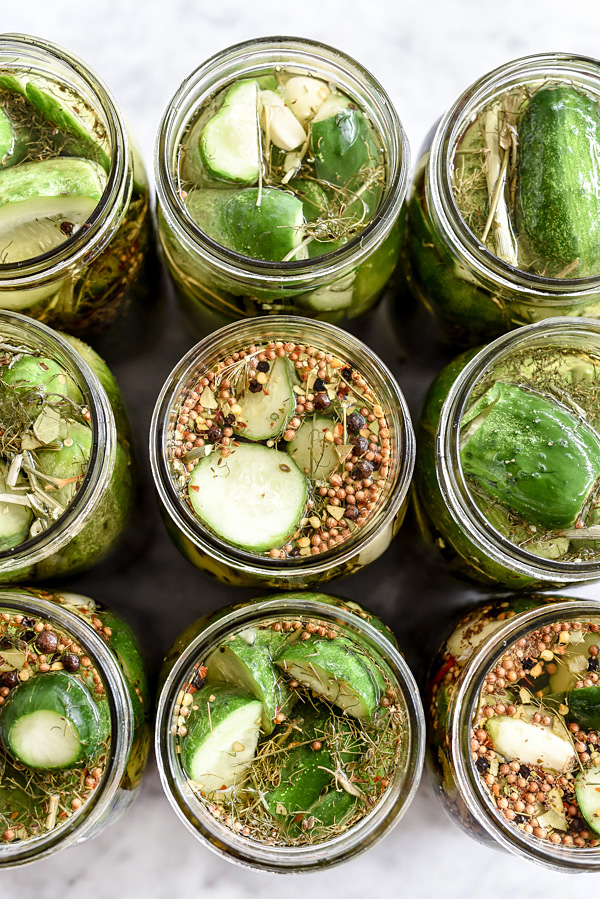 How to Can Pickles

How Long Does it Take to Turn a Cucumber to a Pickle?

At what point does a cucumber become a pickle? Patience is a virtue, my friends. I let these babies sit for about 10 days before I eat them (though you can try them in u). Oh man. They are really, really good. My mom likes to let hers sit for 3 months. I’m not sure how she can hold out that long, but like most things, they do get better with age.

Can I Make These as Refrigerator Pickles?

Yes you can! For refrigerator pickles, skip the hot water bath and place the jars directly into the fridge instead. They won’t last as long and won’t be shelf-stable, but will last in the fridge for 1-2 months.

How Long Are Homemade Canned Dill Pickles Good For?

Store these in a dry cool place and they’ll just get better even better over time. They can be stored for up to 1 year. Just don’t forget to refrigerate any jar you open!

What to Serve With Dill Pickles

For the Homemade Pickling Spice

For the Spicy Garlic Dill Pickles

For the Homemade Pickling Spice 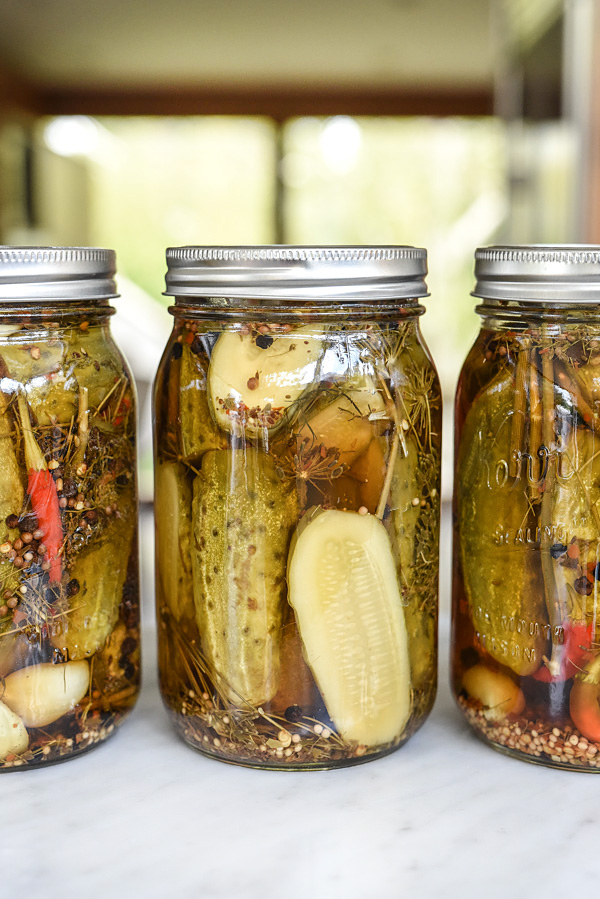