This homemade, old fashioned bread and butter pickles recipe makes a BIG batch. Make them as refrigerator pickles, or can them for later! 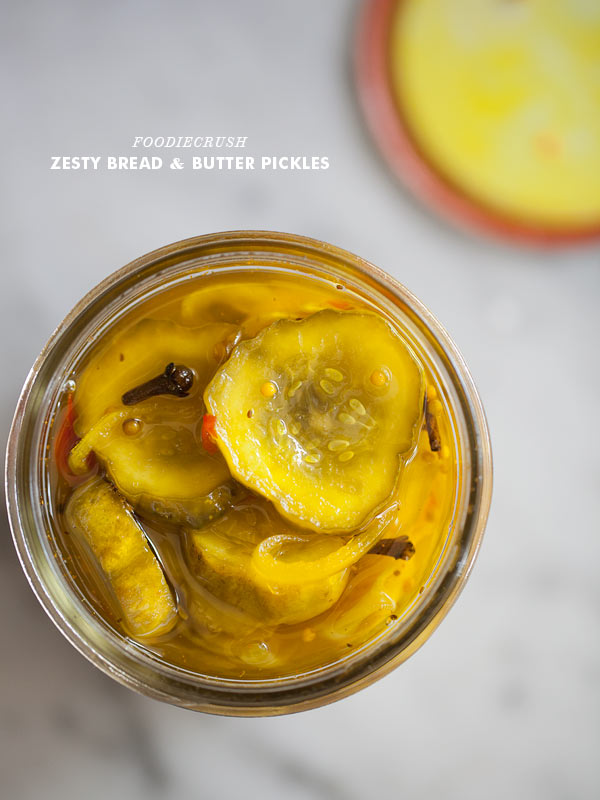 I am a picklehead. I started out as a dill pickle gal and I’ve got recipes that profess my love, like my quick dill pickles and my homemade spicy garlic dill pickles. Growing up, we were a house of dill. Everything I ate had to have a dill pickle on it. My lunchtime tuna sandwich wasn’t complete without long slices of kosher dills (plus one or two on the side.) My after school snack of Triscuits, liverwurst, mustard and dill hamburger chips was my favorite treat as I watched Gilligan mess up the rescue attempts of Ginger and MaryAnn every. single. episode. And I will never, ever be able to eat a cheeseburger without some sort of cucumber stick topping (can I get extra pickles please?) thanks to the memories of stacking my mom’s homemade dills high on just-off-the-grill summer cheeseburgers.

It wasn’t until I was older tat I experienced my first taste of spicy-sweet bread and butter pickles in my husband’s grandmother’s root cellar. Standing on the dirt floor with just a bare light bulb shining the light — cue singing angels — we used a screwdriver to pry open a jar of bread and butter pickles right then and there. Just like most crushes, I spent the next fifteen years searching for the same pickle-love I experienced in that delicious underground pickle lair. Now I think I’ve finally cracked the code with these zesty pickles, inspired by my Grandma Tilly’s recipe. 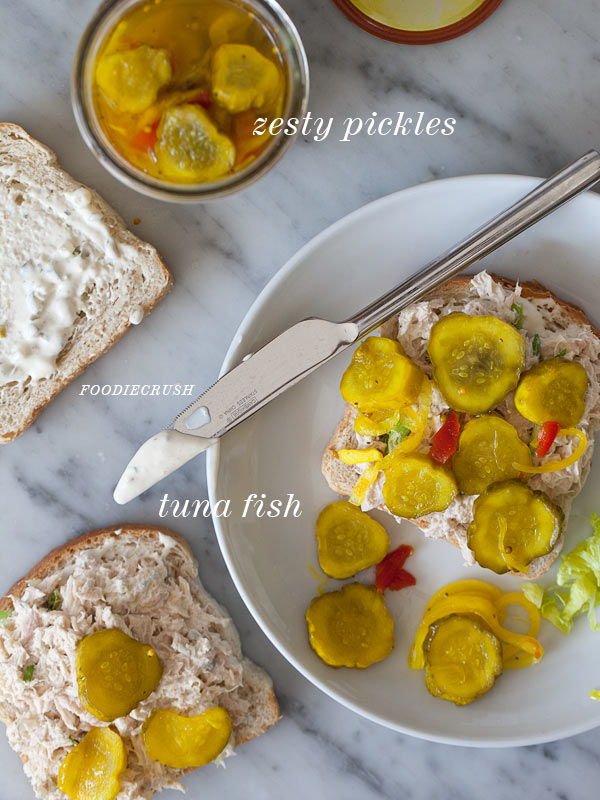 What’s in Bread and Butter Pickles?

As with any homemade pickle recipe, these bread and butter pickles require a variety of pickling spices to give them their unique flavor. For this particular recipe, you’ll need: 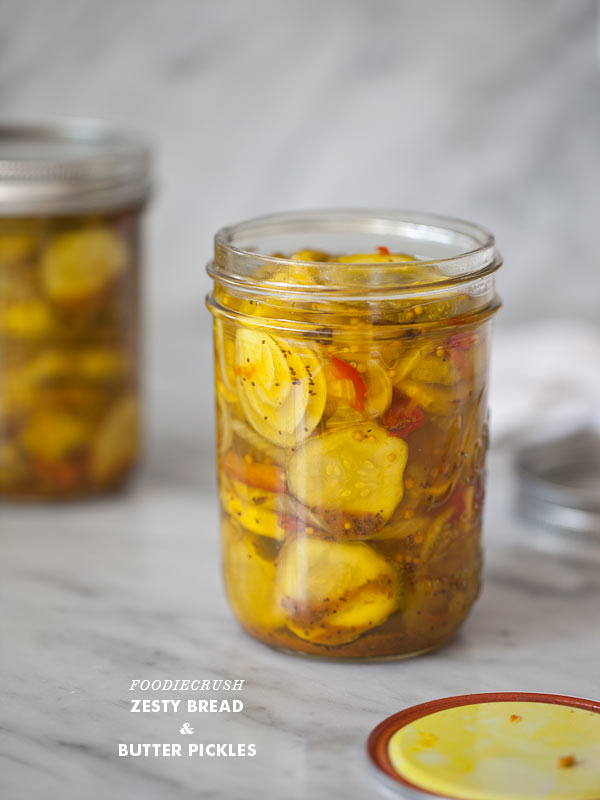 Why are These Called Bread and Butter Pickles?

Contrary to the name, butter is not an ingredient you’ll find in these pickles (and neither is bread for that matter), but many can attest, including myself, that these pickles are truly divine when sandwiched between two well-buttered slices of bread.

Bread and butter pickles can be traced back to two Illinois farmers — Omar and Cora Fanning, who in 1923, filed for a patent for the name to use for their family pickles. The story goes, when Omar and Cora fell on hard times, they exchanged their pickles with their grocer for (ding ding, bread and butter)!

However, these pickles didn’t really begin to catch on until around the time of the Great Depression, when bread and butter pickles started appearing in American newspapers. Soon after, they could be found on the shelves of Piggly Wiggly Food Stores, and by 1943 they were recognized as an American pantry staple.

What is the Difference Between Bread and Butter Pickles and Dill Pickles?

Bread and butter pickles are typically cut in thin sliced rounds, and have a sweeter, more complex flavor profile than dill pickles. Dill pickles are usually thicker-cut rounds or spears, less sweet, tend to have a crispier bite, and boast flavors of garlic and (you guessed it) — dill. I love both varieties equally, so don’t make me choose! 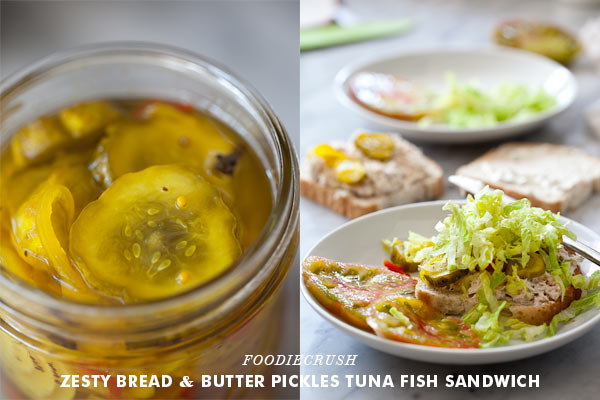 How to Make Bread and Butter Pickles

Once you’ve thinly sliced all the veggies, add them to a large bowl or Dutch oven along with the salt. Give the mixture a good stir and let it sit for three hours.

In a separate Dutch oven or saucepan, add the remaining ingredients and bring to a boil. Once boiling, drain the liquid from the cucumber mixture and carefully add to the boiling vinegar. Remove the pickles from the heat just before they come back to a boil (otherwise you’ll cook the cucumbers).

Transfer the homemade bread and butter pickles to sterile jars and either refrigerate or can for later.

What Type of Cucumbers Should I Use?

You can use really any variety of cucumber for this bread and butter pickle recipe. But if you’re really worried about which cucumbers to buy, look for ones that have thick skin (such as Kirby cucumbers).

How Do I Can Pickles?

I’m not a canning expert, so I recommend checking out a book on canning from your local library or reading through this guide to canning pickles. If you’ve never canned before, remember that you can enjoy this recipe as refrigerator pickles as well! 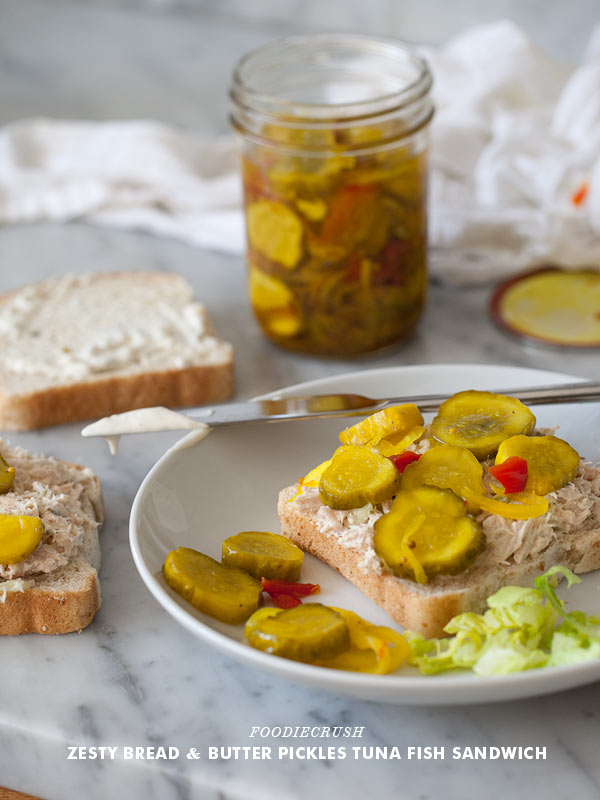 When making homemade bread and butter pickles, you want to slice the cucumbers and other veggies quite thinly. You don’t want them to be so thin they turn to mush in the hot brine, but they should be thin enough to easily soak it up. If you have a mandoline, definitely use it to slice the cucumbers. It makes the job so much easier!

I don’t recommend using another kind of bell pepper in this pickle recipe. I love how the sweet red bell peppers complement the tangy pickle brine — the flavors go so perfectly together that I hesitate to use anything but red peppers here.

Lastly, you’ll want to use yellow onions (or another sweet onion) in this bread and butter pickle recipe. Again, the sweet onion paired with the tangy brine is to die for.