I’ve searched for the best homemade cinnamon roll recipe forever. Perfectly fluffy and slathered with a buttery cream cheese frosting, this is it. 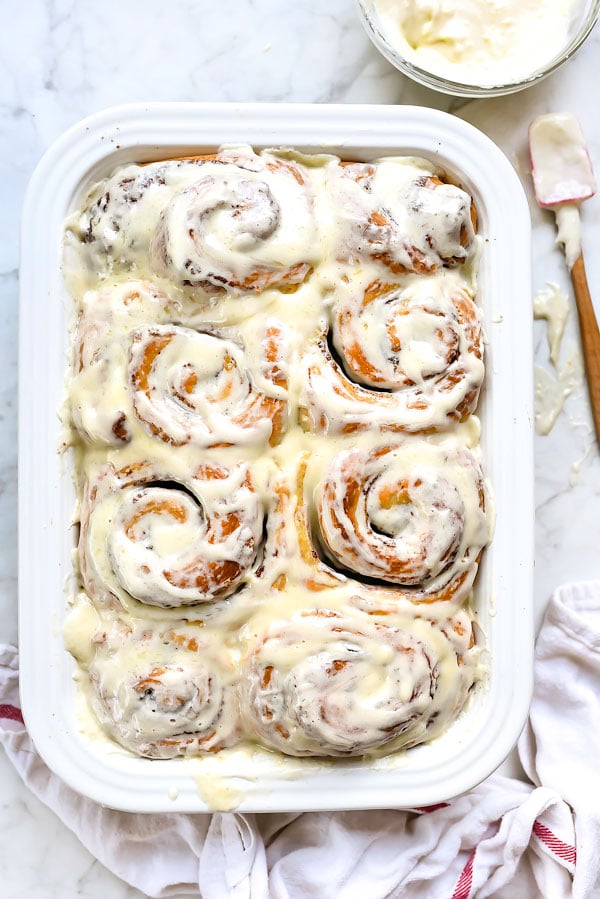 The BEST Cinnamon Rolls Ever

Finding the best homemade cinnamon roll recipe has been my mission for more years than I can count on two hands.

Finding the best homemade cinnamon roll recipe and actually making it, now THAT  is what has been my mission for that number of years.

I’ve Pinned hundreds of recipes on Pinterest, and liked all of them on Facebook. I’ve torn out every recipe from every magazine that’s shared cinnamon rolls deemed fit to bake. And it seems that just about every week of Friday Faves has one more recipe for the perfect cinnamon roll included in it.

Not that I’ve ever made any of them.

For some reason, the notion of  baking homemade cinnamon rolls has always intimidated me. I blame it on my childhood. That’s when my early cinnamon roll baking adventures relied on using the pre-made dough from the can that came out of the oven tasting like they’d been baked 3 days before and then quickly turned into 5-day-old rolls as soon as they cooled.

It ruined the notion of cinnamon rolls for me until I had a REAL cinnamon roll from a true blue bakery and realized just how many light and fluffy pillows from cinnamon and brown sugar slathered with glaze bundles of heaven I’d been missing out on all those years.

Now THOSE rolls are the ones I want to bake. The homemade cinnamon rolls I want to be known for. The rolls that when family and friends take one bite they blissfully roll their eyes in satisfaction as they slowly absorb each sweet, flaky bite, and then look to one another in agreement and say, “Heidi makes THE BEST cinnamon rolls.”

And now, I have that recipe. 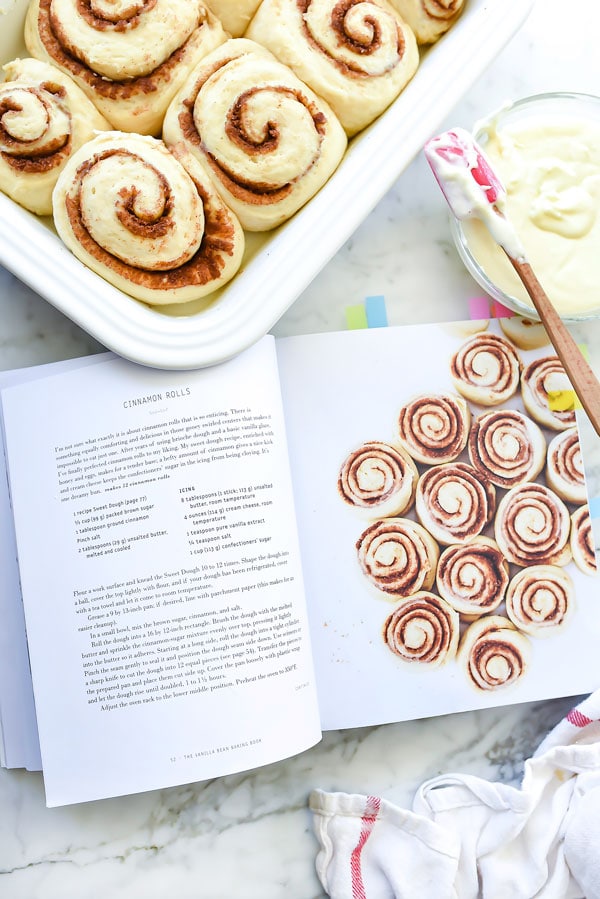 This is it. This is the recipe I will from today forward forever be known for, the one that will give me the title as the Cinnamon Roll-Making Queen.

But I absolutely cannot take any credit for it. No way. All the credit goes to Sarah Kieffer, the blogger behind the blog that Savuer named the Best Baking & Dessert Blog, The Vanilla Bean Blog, and a friend who is nearly as sweet but hardly as flaky as these rolls. I’ve featured Sarah on the blog before (check it out here) and this cinnamon roll recipe comes from Sarah’s first cookbook, The Vanilla Bean Baking Book. 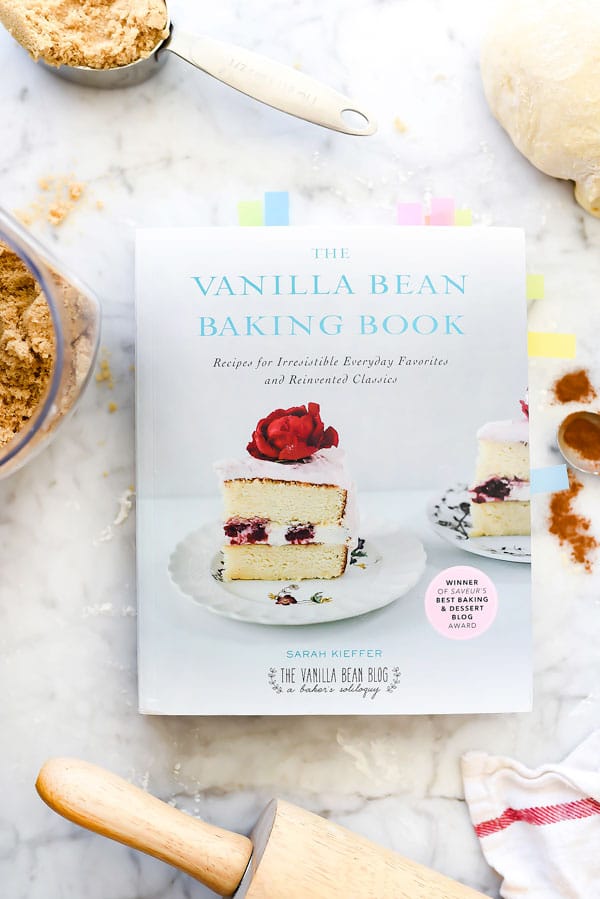 These cinnamon rolls start off with a recipe for sweet dough that Sarah uses as the base for several recipes in her book. The dough is perfectly tender (thanks to honey and eggs) and is actually really simple to make with only the help of a stand mixer that does most of the kneading for you. The only work that needs to be done is setting the timer on your phone to remind you to give the dough its series of flips and folding after its series of rising times.

Start the Rolls at Night

I found the perfect time for making these easy cinnamon rolls was in the evening, starting the dough making process while fixing dinner, then flipping and folding as the evening wore on and finalizing the process before I went to bed. The dough can be kept in the refrigerator for up to three days, making it a good candidate to add to any brunch or breakfast table. One thing to note, the dough will be pretty shaggy and rough the final time you pull it out of the fridge.

But this is a miracle dough. With just a few kneading pushes the dough becomes pliable and smooth, and amazingly easy to work with.

Once that bit is over, the rolling process is the only production piece of the cinnamon roll puzzle left to finish off in the morning. I’m sure that eventually I”ll get the hang of rolling out the perfectly even and 16-by-12-inch rectangle with perfect thickness, because that’s what queens do. They perfect things. 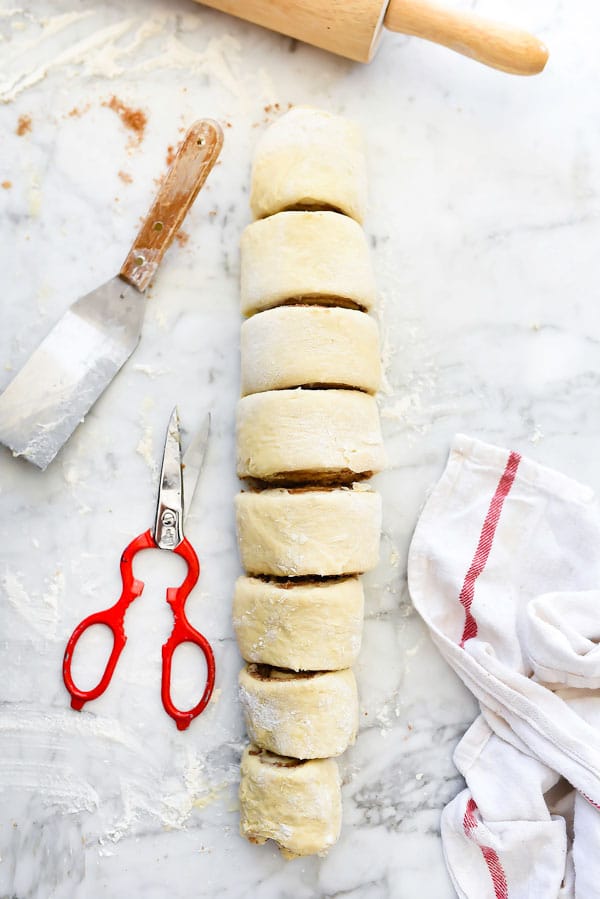 This first time of my baking these rolls didn’t come out exactly perfect in my cutting proportions, but I’m totally okay with that because these rolls are amazing and who cares if one is a little more misshapen than the other. Builds character is what my mom always said.

Smudge requested BIG rolls (a girl after my own heart), so I cut these down into just 8 rolls. You can certainly make them smaller to 12 portions and pack them in tighter if you prefer.

Since I followed all of Sarah’s instructions to the letter, making the cream cheese glaze was not going to be any different. Sarah suggests slathering a layer on as soon as the rolls come out of the oven so the glaze sticks in every nook and cranny, and then adding more again after they’ve somewhat cooled. Smart girl that one.

My only comment here is I seemed to have quite a bit of glaze left over, even after swiping my rolls with a double dose. But in cinnamon roll-land, isn’t that the best problem to have?

All hail the Queen of Cinnamon Rolls! That would be Sarah. Me? I’m just happy being in her royal court. 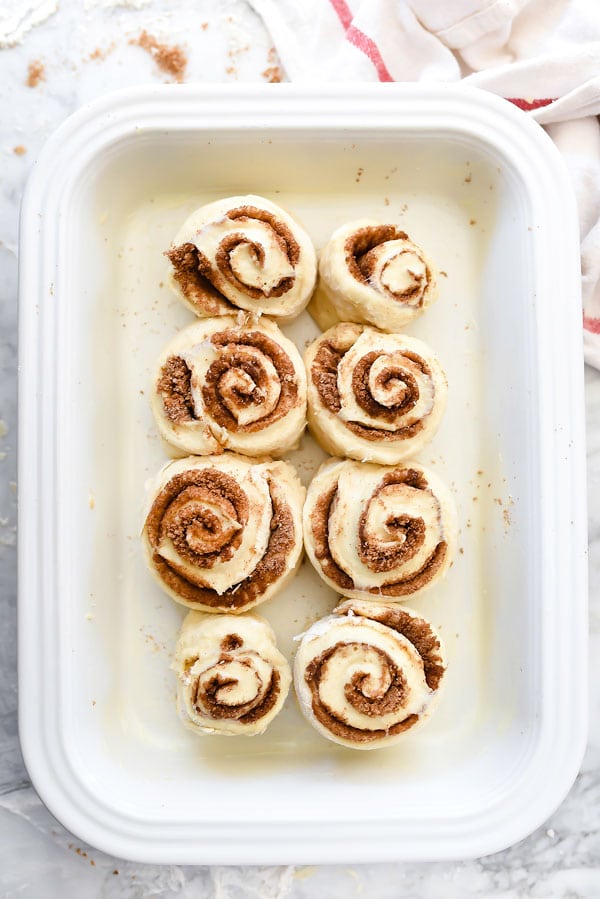 What’s in These Cinnamon Rolls?

I’ve already waffled on enough about how amazing these cinnamon rolls are. Now it’s time to get to the good stuff — how to make them.

Here’s what you’ll need to make the cinnamon roll dough:

And for the cinnamon roll filling you’ll need: 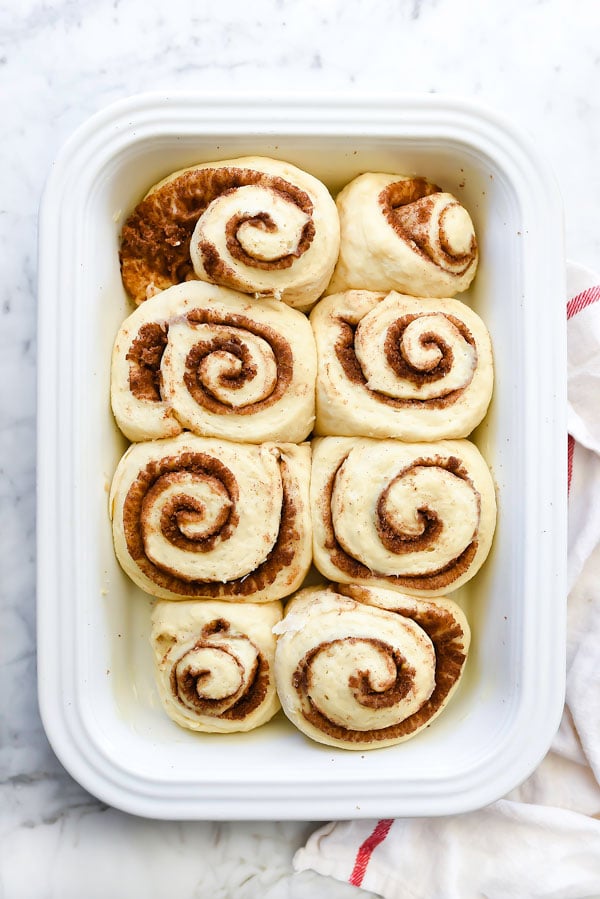 How to Make Cinnamon Rolls From Scratch

Once the dough has had time to rise and has been folded multiple times, cover it one last time with plastic wrap and let it chill in the refrigerator overnight.

Roll It Out In the Morning

The next morning, roll the dough into a large rectangle. Brush it with melted butter, then sprinkle with a mixture of brown sugar, cinnamon, and salt. Roll up the dough and cut into even-sized pieces.

Place the cinnamon rolls in a greased baking dish, then cover them with plastic wrap and let them rise until doubled. Once risen, bake the homemade cinnamon rolls until golden.

While the cinnamon rolls cool, make the icing and smooth it liberally over the rolls while they’re still warm. 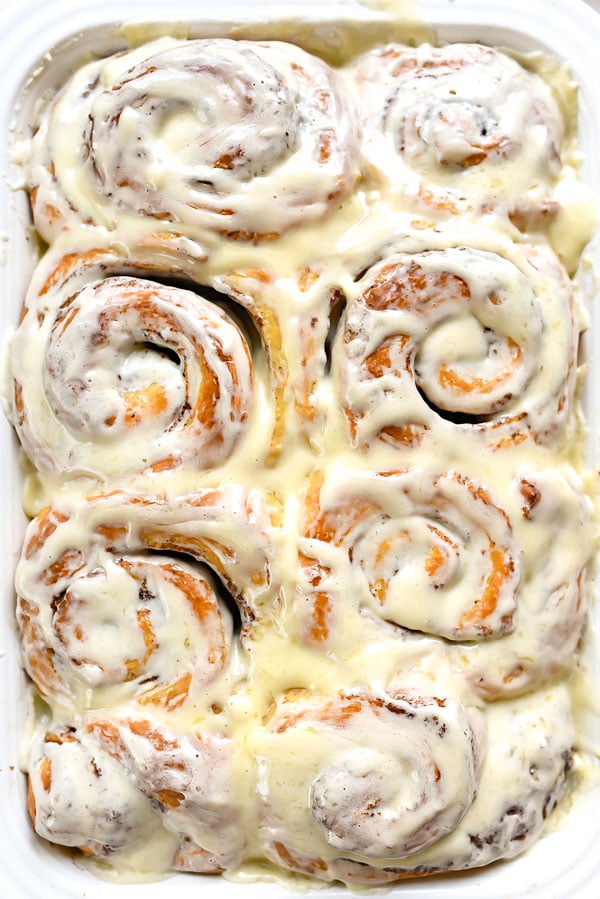 Can I Freeze Cinnamon Rolls?

Yes, you can freeze cinnamon rolls. First let them cool completely, then seal them in a freezer bag and freeze. When you’re ready to eat the frozen cinnamon rolls, set them on the counter to thaw. Note that you should freeze them without the icing, and should make a fresh batch of cinnamon roll icing just before you serve them.

Can I Refrigerate These Overnight During the Second Rise?

A few readers have asked whether it’s okay to shape the cinnamon rolls and let them rise overnight in the fridge instead of setting them out to rise at room temperature until doubled in size. I personally haven’t tried this method myself, but some people have reported success with this method.

I imagine you’d want to let the chilled cinnamon rolls come to room temperature before baking them, but that’s just a guess. Again, I’ve never made these homemade cinnamon rolls other than how the recipe instructs, so use your best judgement here!

Feeling like ways to customize your cinnamon rolls? Here’s some ideas:

For the Sweet Dough 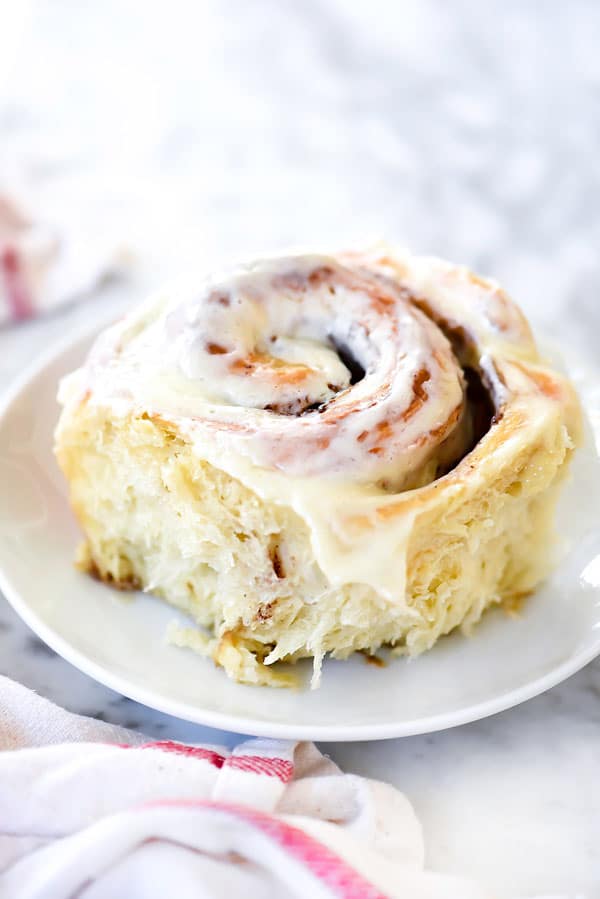