This deep dish spinach bacon quiche recipe has a tender cream cheese crust that bakes up light and fluffy. Greek yogurt adds a tang and creaminess to the fluffy egg center baked with spinach, sautéed leeks, and crunchy bacon bits. 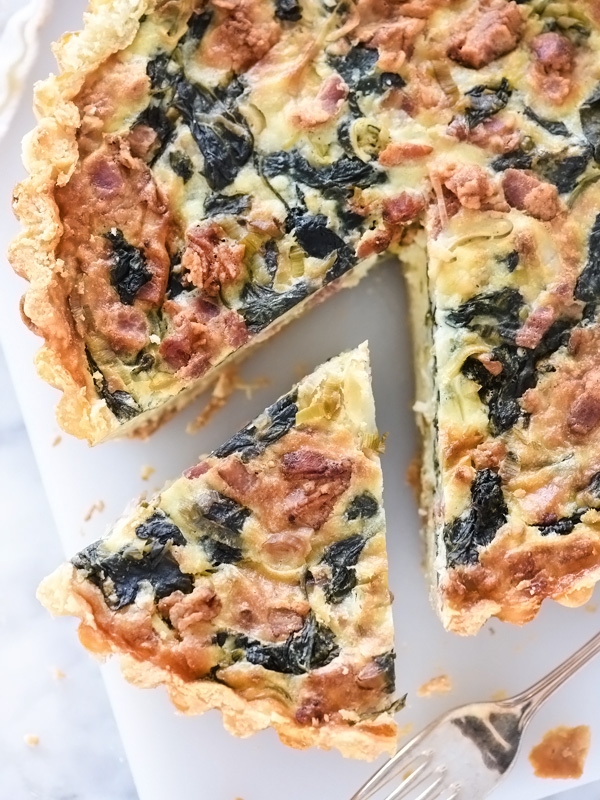 Are we our own worst critics? Or is it the other guy? Do we expect more from ourselves because we’re always in search of measuring up? Or is it truly because others expect us to rise to the occasion?

I’m betting it’s all of the above.

Yesterday I received a comment from Caryn who said, “Made these tacos tonight. They were AMAZING! Will definitely make again soon! Thanks for sharing!

Shortly afterward, I received a comment from Amy, a reader reporting that a recipe she made of mine, was in her words, “…one of the worst recipes I’ve ever tried. I’ve followed the recipe directions to the letter, but after 30 minutes, these bars are still not cooked. In fact, the top is crispy, but just underneath it’s still completely liquid. What a mess!!!!” 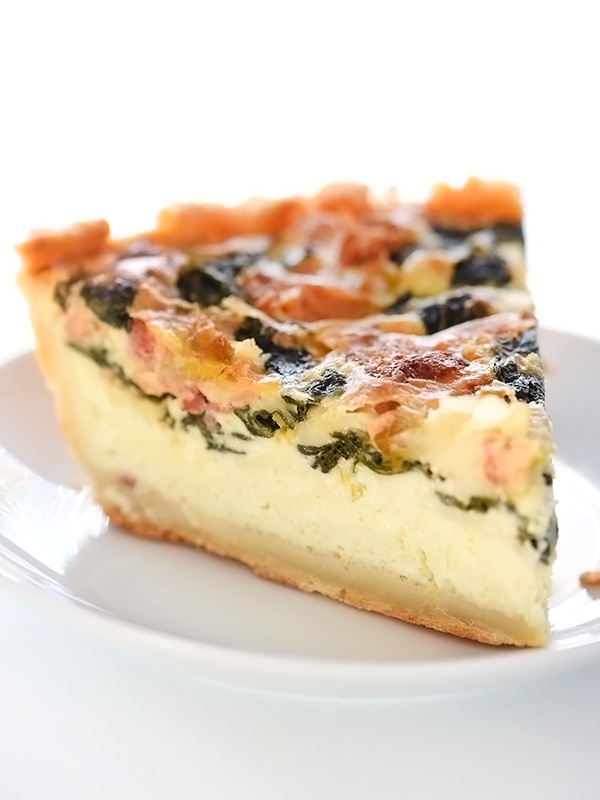 Because I’ve deemed it my job to deliver recipes that others want to make successfully, I truly appreciate both of their feedback. And oh how I can relate to Amy, and man, I wish the recipe had measured up to her expectations like it did for me and others who have made it.

I can totally relate to Amy because I’ve had the same exact experience: to be inspired to make a recipe, follow it to a T, and be left disheartened because it didn’t turn out as I expected.

What did I do differently—aka wrong—making it so that her version didn’t turn out? Are my recipes good, like Caryn said? Or are they prone to failure, like Amy said?

And thus, the second guessing and self critiquing begins.

It’s ironic that I had both of these comments in a span of 15 minutes, while writing this post, because nothing exemplified Amy’s feelings more than when I was developing this spinach bacon quiche recipe. It nearly did me in, but I kept at it because I craved this deep dish quiche pie.

Baking can turn into the evil step-mother in the blink of an eye. There are two secrets to a great quiche. 1: The crust, and, 2: the custard. And if you don’t have both, you have a sucky quiche.

See, I know this because I’ve been in search of the best deep-dish quiche recipe for umpteen years. In my search I’ve made it a point to taste test some amazing looking quiches I’ve found along the way. There was my FAVORITE quiche I had from this little French bakery while on vacation in Turks and Caicos. Then, I sampled another tasty version at a local coffee shop where I discovered this fluted pan with a removable bottom.

I bought the pan thinking that might be part of the secret. The removable bottom definitely makes it easier if nothing else. Then I set upon researching and testing recipes so I could create my own. I tried deep-dish quiche recipes that said they were fool-proof, that said they were the best, and recipes that celeb chefs deemed infallible. Just like my reader above who had issues with one of my recipes, I followed these quiche recipes just as instructed and still had failures that measured from just so-so to disastrous. Tart shells that oozed filling and were unservable to my brunch guests. Insides that were barely cooked but wayyy too browned on top. Pie crusts that simply melted off the sides of the pan into heaping piles of crust.

For example, this beautiful cream cheese based pie dough is a dream to work with. I should know because I made it and three other pie dough recipes before deciding this was the winner for this recipe.

But if you don’t blind bake it correctly—aka weighted down with beans that none of the recipes I tried suggested I do—in a mere 15 minutes of baking, it has the potential to shrink like a shy little flower and come out looking like the pie crust below.

How could they all be wrong? How could each of these recipes have failed me? This baker needed practice and to figure out what worked best in my own kitchen. And I’m happy to report that I did. And I sent that evil stepmother packing. What’s in This Spinach Bacon Quiche?

The beauty of making homemade quiche is that it requires very few ingredients despite being packed with flavor. Here’s what you’ll need to make this deep dish quiche recipe: How to Make Spinach Bacon Quiche

To make this spinach quiche recipe, you’ll first need to make the cream cheese pastry shell. Once the dough comes together, let it chill for 30 minutes before rolling it out and placing in a 9-inch round pan. Then, freeze the pastry shell for at least 2 hours before blind baking.

Once the pastry shell is golden brown, stir together the spinach bacon quiche filling and pour it into the crust. Bake the deep dish quiche just until golden brown and the center is set.

The spinach bacon quiche will need to cool for at least 30 minutes before slicing and serving it.

How Long to Cook Quiche

In total, this spinach bacon quiche will need to bake at 325ºF for roughly 90 minutes. 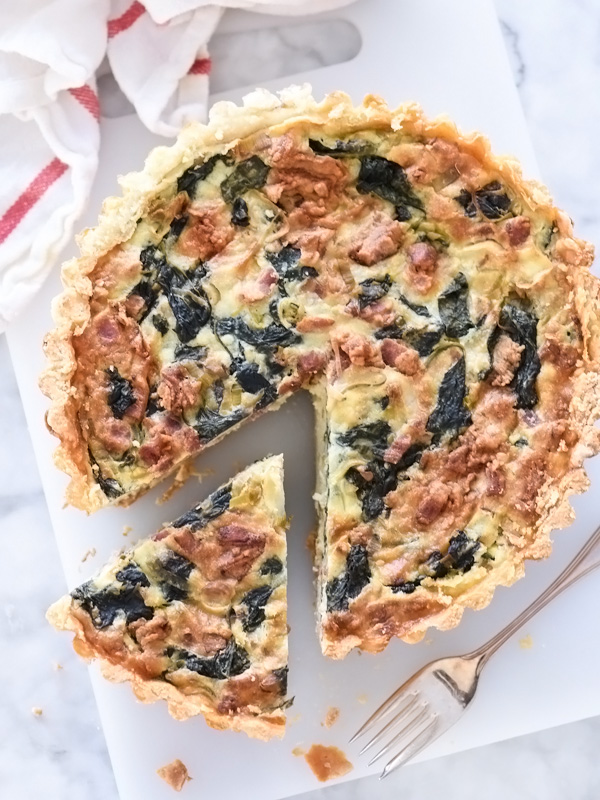 How to Reheat Quiche

To reheat quiche, place on a baking sheet and wrap in aluminum foil. Bake for 10-15 minutes at 350ºF, or until warmed in the center of the custard

Can I Use a Yogurt Substitute in the Filling?

The egg custard for this recipe gets a jolt of healthy thanks to the addition of greek yogurt. It adds a bit of tang to the recipe that we found delicious. In testing the recipe, I tried it with both whole fat greek yogurt and fat free yogurt and didn’t experience a difference in texture between the two.

If you’re not a yogurt fan, substitute with the same amount of half and half or whole milk.

Can I Omit the Bacon?

Of course! If you’re going veg, you could easily omit the pork products. Tips for Making the Best Quiche

When creating this spinach bacon quiche recipe, I tested a variety of pie crust recipes. I made them in different combinations of all-butter crusts, with some mixed in the food processor, some by hand and another in the stand mixer. With water, with egg, with cream cheese and with none. I went back to my successful pie crust for Curried Turkey Pot Pie and even consulted the bakery chefs at Deer Valley Resort, and then I merged the ingredients and processes of the two.

What I discovered along the way when making this crust is to make sure it doesn’t slide down the sides of the pan. Blind baking the crust prior to filling it with the custard requires there must be a “filling” to keep the crust in place.

The key to the crust, for me, is freezing it in the pan it’s to be baked in. Then I emptied the contents of a 4 pound bag of uncooked beans placed on parchment paper and filled my pan all the way to the top of the crust. From there it goes straight to the oven. That was the missing instruction in each of the recipes I tried in my recipe development quiche crust quest. If you make this recipe, please let me know! Leave a ⭐️⭐️⭐️⭐️⭐️ rating on this recipe below and leave a comment, take a photo and tag me on Instagram with #foodiecrusheats.

For the Cream Cheese Pastry Shell:

For the Quiche Filling:

For the Cream Cheese Pastry Shell:

For Assembling the Quiche: 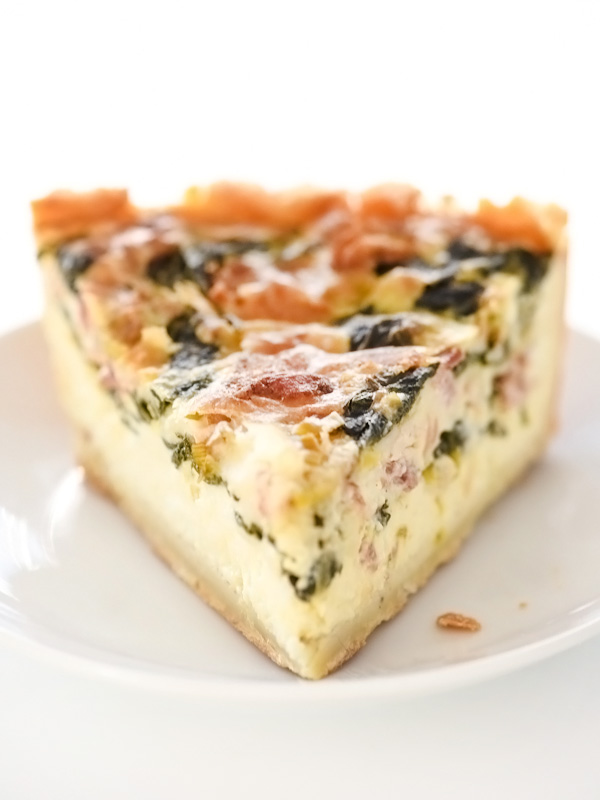