Garlicky chunks of bread are mixed with cream cheese, spinach, and artichoke hearts, then stuffed back into the shell and baked for a show-stopping appetizer everyone will want seconds of! 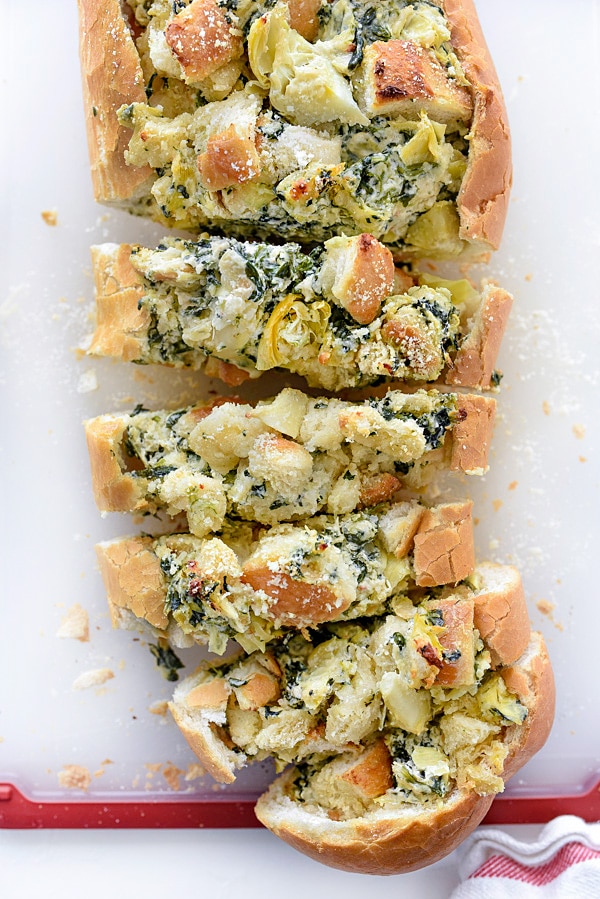 Like so many of my favorite recipes, I keep the originals in my tattered, over stuffed, recipe book I bought when we were first married. It’s filled with the hand-written recipes I’ve discovered have been handed down to me by my mom and grandmothers or shared with me by friends.

This is a variation of one of those special recipes. Its title in my much-better-penmanship-then-than-now-because-all-I-do-is-type is Mark’s Yummy Bread. Mark was the post college boyfriend of one of my besties. He and Julie aka Flash (whose nickname came about because she is so smart and such a thinker she is the opposite of fast) made this stuffed cheese bread for us at a friend party we hosted at our house. Ironically, about a year later, Mark actually bought that house from us. Apparently, we really know how to throw a house party.

And now, even more years later, we still talk about this bread. You could say it became legendary.

Mark and Julie’s relationship may have gone by the wayside, but even then I wasn’t bashful in prodding people for their recipes and so asked Mark to share his with me. That’s the smart cookie that I am. Years have now passed, and over time I’ve simplified the ingredient list but kept the original flavors intact to create a bread worthy of it’s original title. 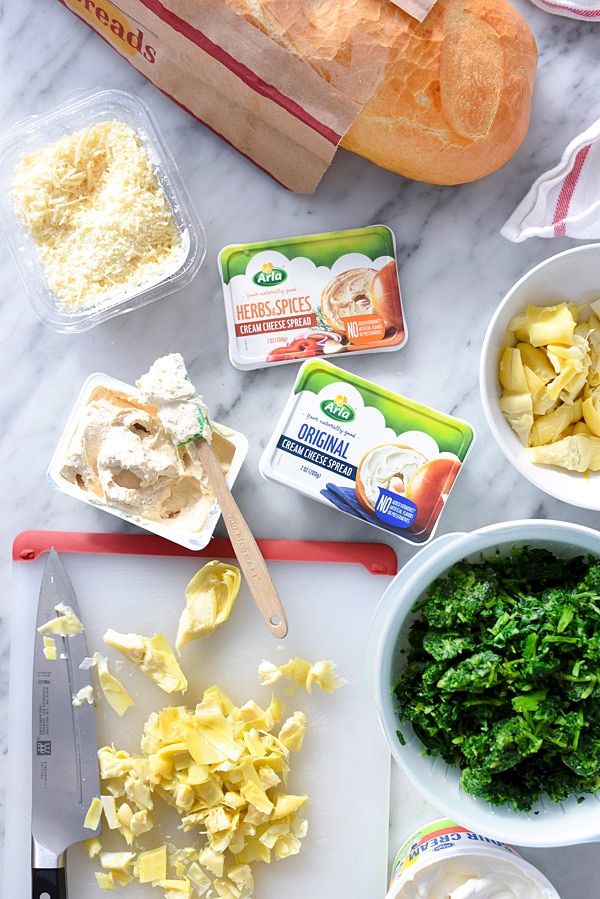 These days I keep it simple and use flavored cream cheese to create the creamy base to this dippish bread. One of my favorite things about Arla cream cheese is there are no added thickeners or stabilizers so its extra creamy and you can pull it straight from the refrigerator to mix for this spread.

Arla cream cheese comes in several flavors including Original, Herbs & Spices, and Peppercorn. I used a mix of the Herbs & Spices and Original to add all the herb flavor needed for this gooey bread. 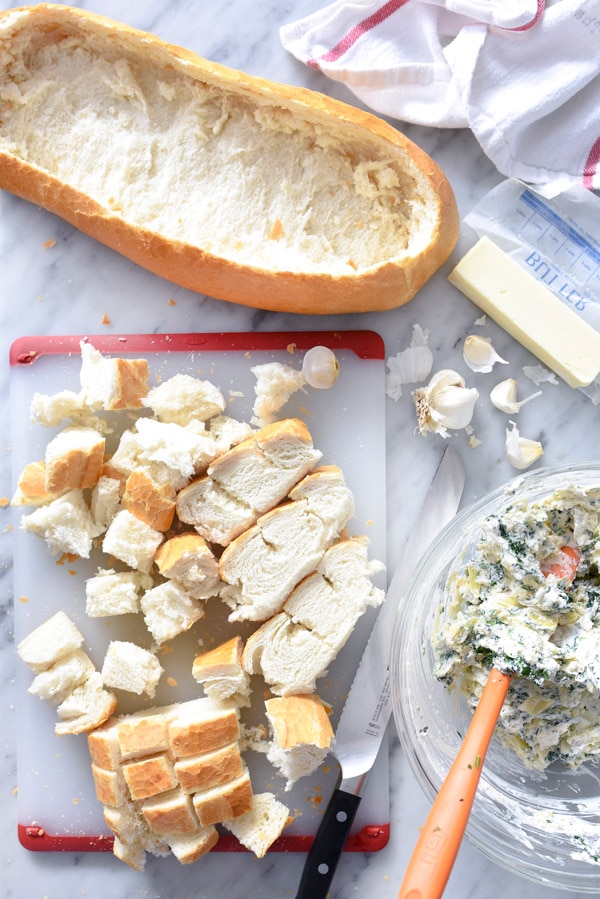 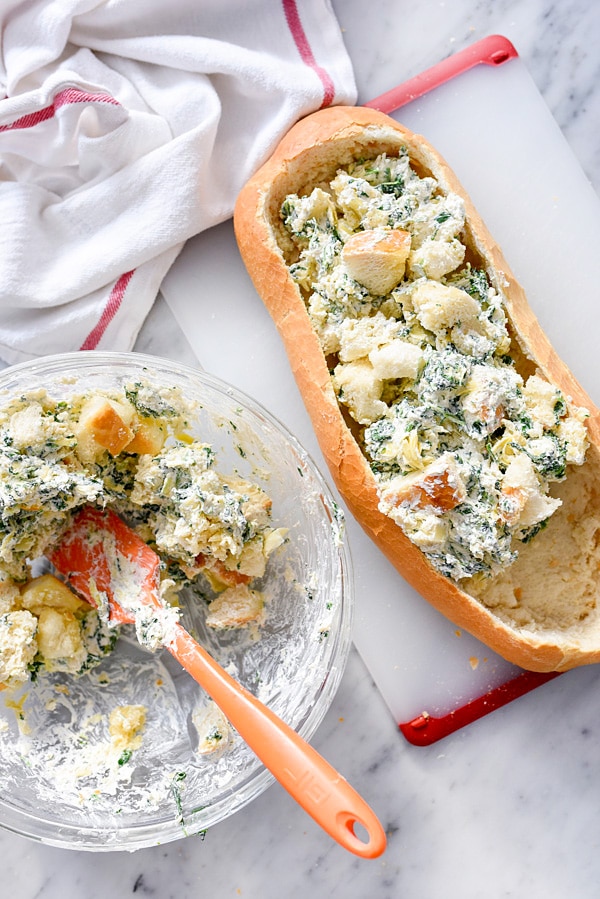 Spinach and artichokes are a wildly popular combination when it comes to dip, and I’m no exception in being a fervent dipping fan.

While there are plenty of variations of dips served in bread, I especially like this style because the top crust and gooey inside of the french bread is cut into chunks and then soaked in garlic butter. Oh the flavor! Then, the chunks are loosely mixed in with the dip cheese mix and placed back into the sturdy french bread shell. 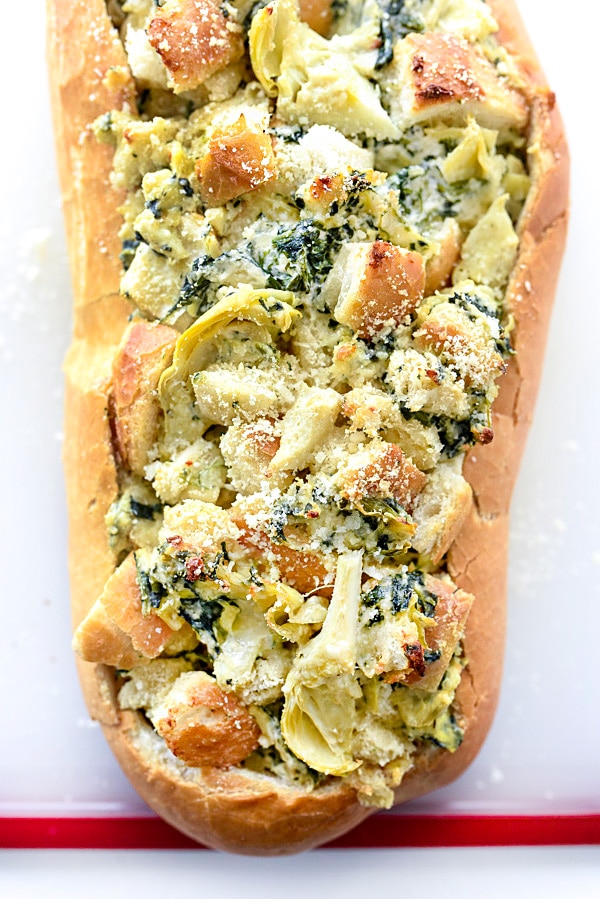 Before baking, I wrap the outside of the bread in aluminum foil, and loosely tent the top so it doesn’t get too browned, but still holds in the heat to warm the insides. Be sure to place on a baking sheet before popping in the oven for easiest transfer to and fro. 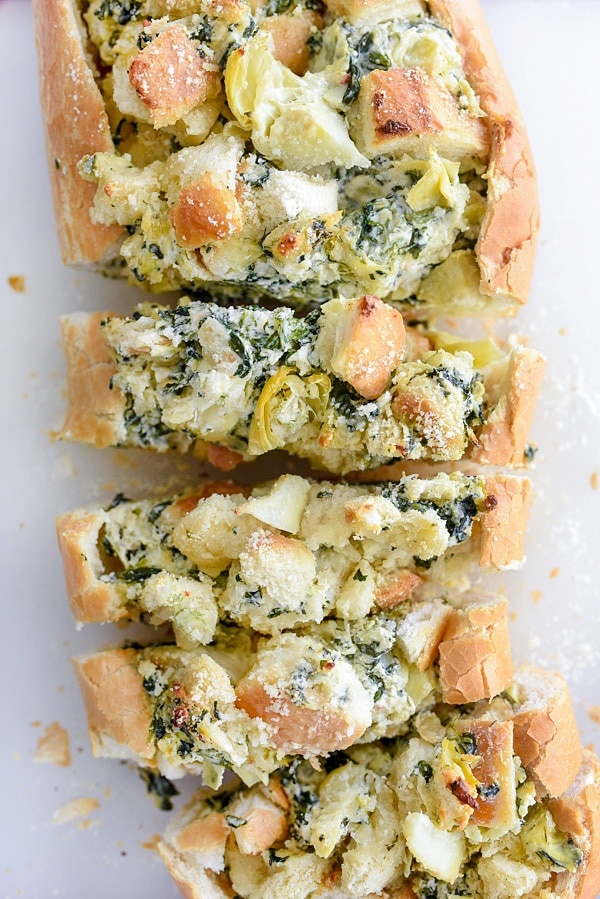 Serve sliced, or even diced to accommodate more bites to feed a crowd, and then watch it disappear.

I’m here to vouch that it’s yummy factor will absolutely keep people talking about it for years. 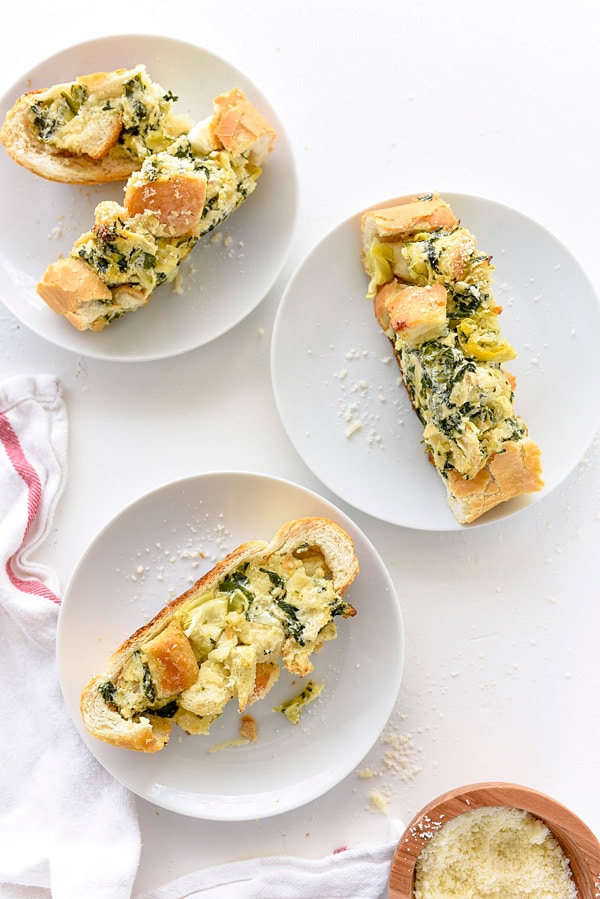 Tip: There are plenty of adaptations you could make with this bread. Add green chiles. Sub in sun dried tomatoes and olives. Or even sausage or caramelized onions. Craving crunch? Top with toasted sesame seeds or pine nuts for a nutty flavor.

Garlicky chunks of bread are mixed with cream cheese, spinach, and artichoke hearts then loaded back into the shell and baked for a favorite appetizer on the table. 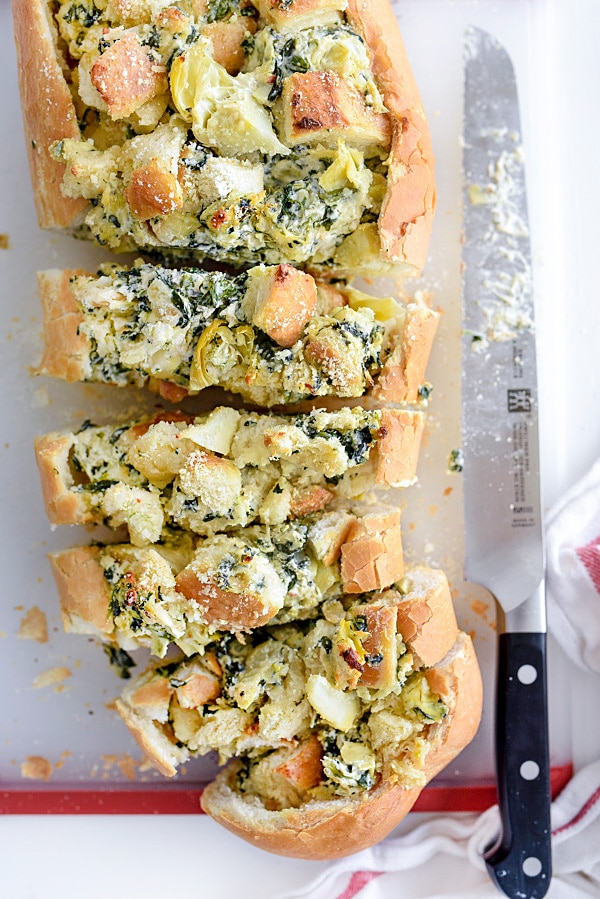 Have a great day, and I hope this recipe inspires you to get into the kitchen and make something good.

This post is part of a partnered series with Arla USA. As always, thank you for reading and supporting companies I partner with, which allows me to create more unique content and recipes for you. All opinions are always my own.