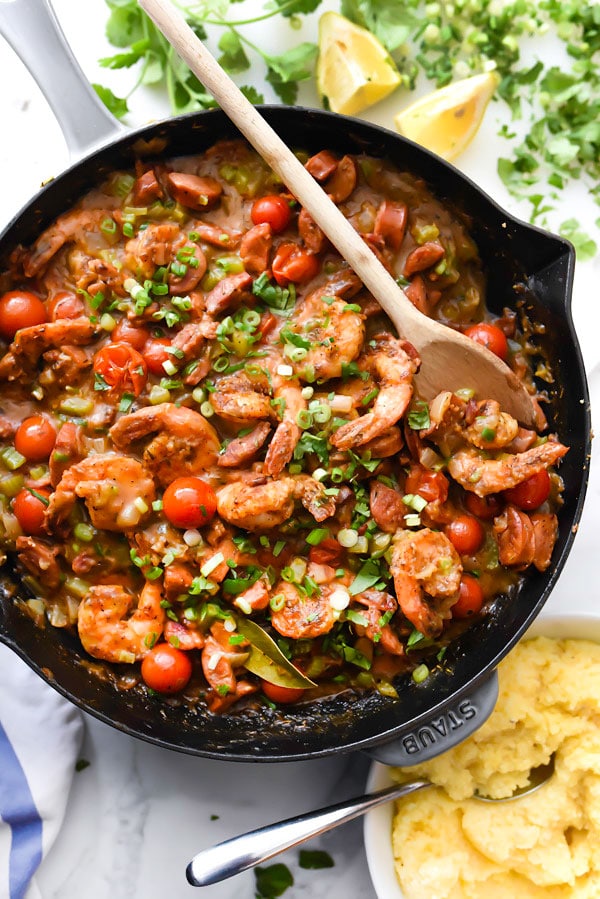 Creating This Shrimp and Grits Recipe

I’ve been on a quest to find the best shrimp and grits for at least the past 10 years. Quest? Obsession? Tomato, tumahhhto. I suppose I’ve simply been trying to get in touch with my inner Southern belle.

I grew up in the West and didn’t set foot in the South until recent years, so I didn’t have much familiarity with Southern food since our family dinners veered more toward my German dad’s taste for his favorite wienerschnitzel and my mom’s spaghetti with tomato sauce rather than Southern classics like this one.

But as my taste buds became more worldly and my flavor cravings crossed the Mississippi river line, I discovered that collard greens do indeed taste good, reubens taste so much better from a NYC deli, that I prefer gumbo over chili, and that catfish po’ boys are made for kings. 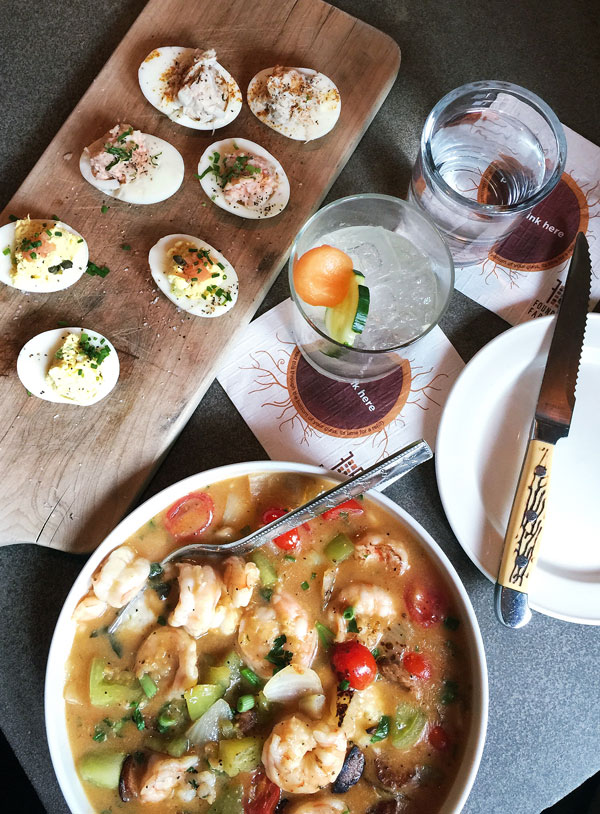 While on a work trip to DC to speak on a panel at the IACP conference, I had the best shrimp and grits to date at one of DC’s most renowned restaurants, Founding Farmers. I sat at the counter by my lonesome, enjoyed this cucumber cocktail with some deviled eggs that I shared with my neighboring counter mates because I was saving myself for the star of my show: Southern shrimp and grits.

Since that trip, I’ve continued my quest. I’ve tried shrimp and grits in Florida, South Carolina, and parts in between. But none could compare to that from Founding Farmers. And the only way to get my shrimp and grits fix was to make them at home. Thus, I turned to the internet and discovered Founding Farmers published a cookbook with said recipe for Low Country Shrimp and Grits. And this, my friends, is it. Or at least my version of it.

Give it a taste, listen to your gut, and make my favorite shrimp and grits your own. 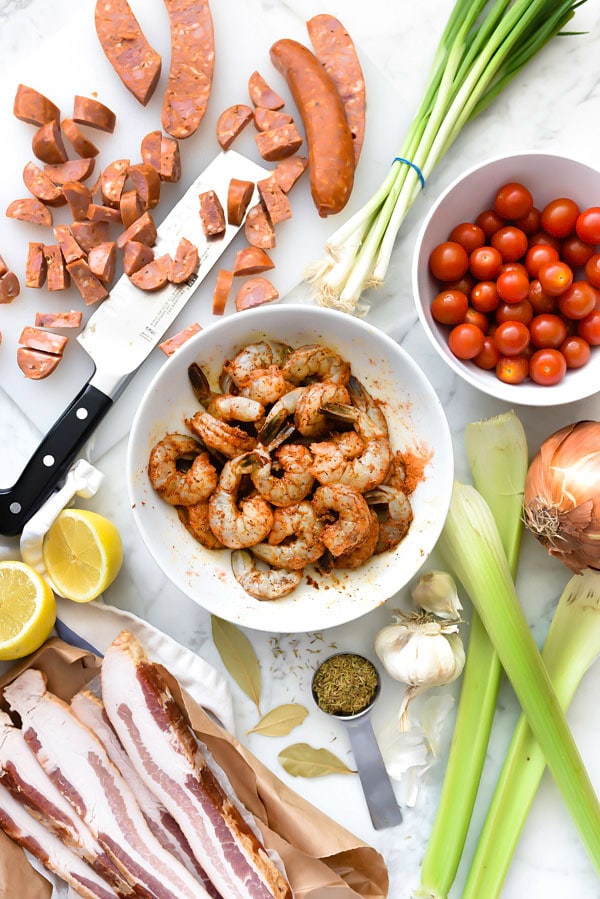 In my version of this recipe I made a few adjustments to the original, taking out a bunch of steps to make it a little easier to prepare. Don’t be alarmed at the length of the ingredient list, this dish is very simple to prepare, takes just one pan to make (plus one for the grits) and just a few steps to get to the finish line.

Traditional shrimp and grits calls for tasso ham, but that’s unheard of in my area. So, to get the same smoky flavor, thick cut bacon makes the cut. Smoked Andouille sausage is a cajun sausage that adds a smoky spicy bite, but if you can’t find Andouille, a Spanish chorizo will suffice just fine.

A bit of Worcestershire sauce adds depth, lemon perks up the gravy and Tabasco heats it up. Add a little more of any to suit your own tastebuds.

You’ll need a handful of other veggies to make this shrimp and grits recipe, plus coarse grits, heavy cream, whole milk, and a few more special ingredients. This definitely isn’t an everyday recipe, so I don’t mind having to shop for a few extra ingredients when making it. 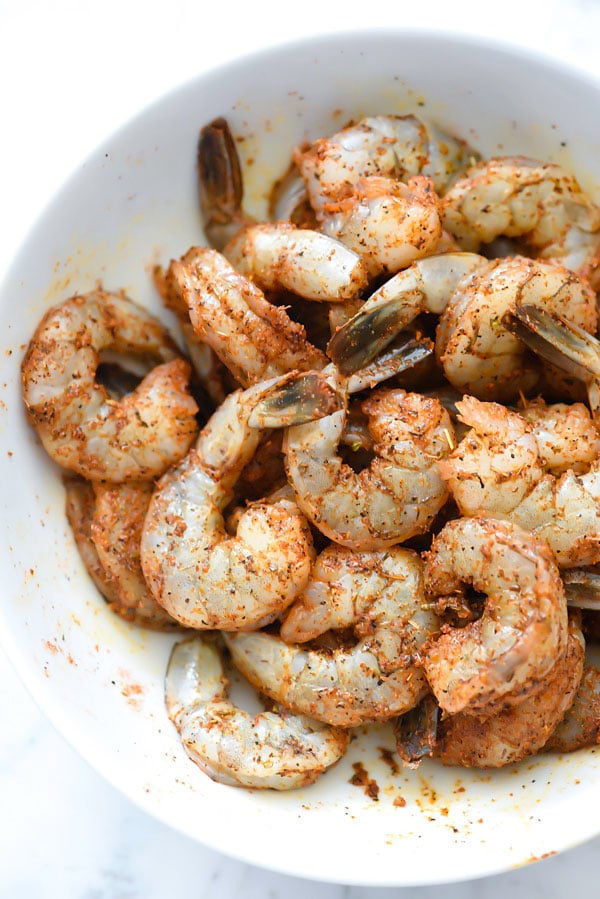 How to Make Shrimp and Grits

To make this Southern shrimp and grits, first combine the grits with some water and whole milk over medium-low heat and bring to a boil, then reduce to simmer. Stirring occasionally, cook the grits until tender and creamy, then stir in the salt and cream and keep warm until ready to serve.

Next, I toss the shrimp directly into the cajun seasoning to let the spice seep into the nooks and crannies and then toss it in the flour just before cooking in a bit of reserved bacon fat. We’re building our flavors so using the reserved bacon fat keeps that bacon flavor strong.

Then, I brown the sliced Andouille sausage in the same skillet I cooked the shrimp and set it aside. From there, the veggies are cooked and then tossed with flour and cooked a bit more to cook out that floury flavor and to thicken the sauce once the clam juice and chicken broth is added and cooked down. This is where you decide whether to thicken the sauce or thin it out.

After that, it’s just a matter of returning the sausage and shrimp to the pan, mixing in the remaining ingredients and heating everything through. Serve the spiced shrimp mixture over the creamy grits and dig in! 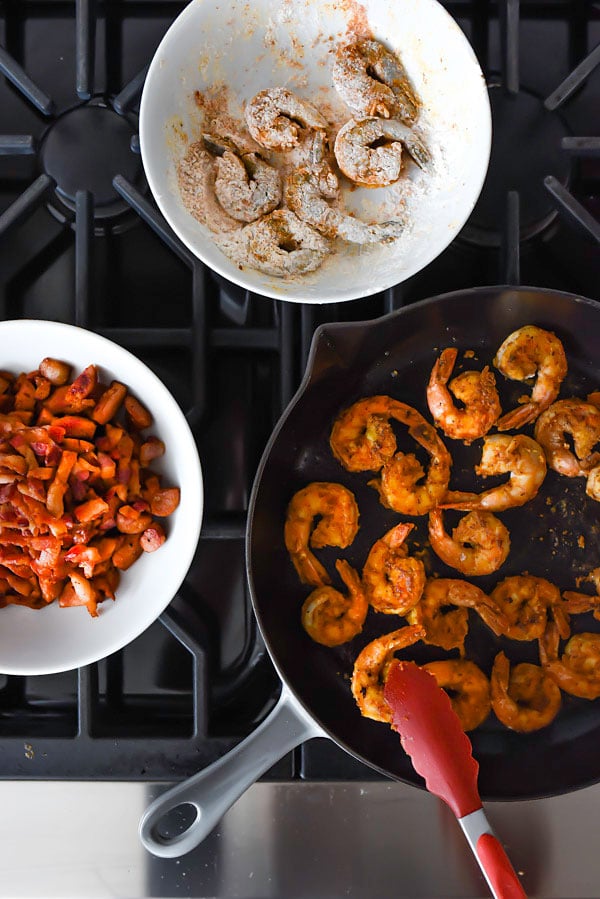 Which Cajun Seasoning Should I Buy?

I switch between Emeril’s and Paul Prudhomme’s Cajun seasoning. As long as it’s nice and spicy, it’ll work in this recipe!

Is There a Grits Substitute I Can Use?

If you can’t buy grits where you live, you may be out of luck. You need to use grits or coarse cornmeal for this recipe. Polenta is similar, but not quite what you want here.

Can I Make This Dish Ahead of Time?

No, shrimp and grits is best enjoyed right away. The grits will harden in the fridge and shrimp doesn’t reheat very well, so I recommend serving this as soon as you’re done making it. 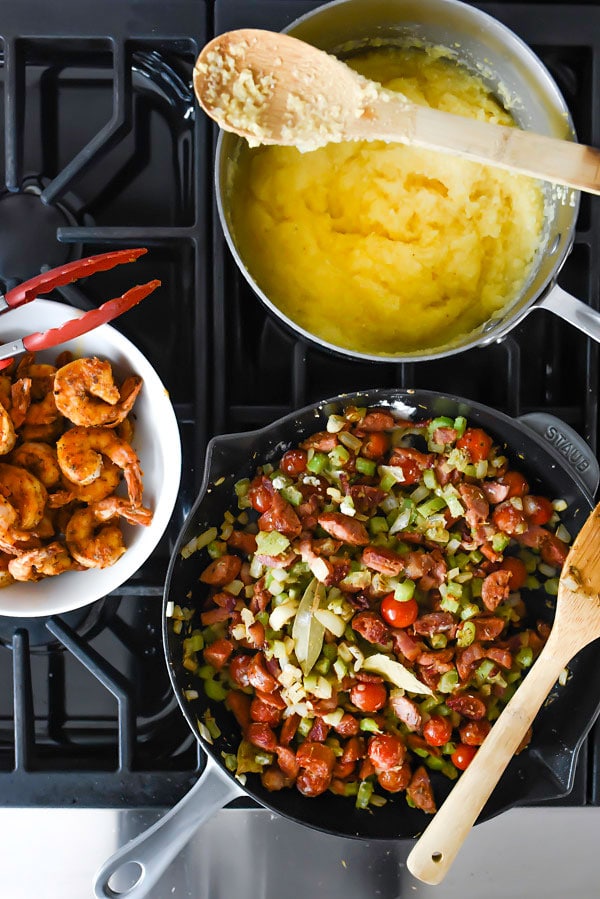 Tips for Making Shrimp and Grits

The consistency of shrimp and grits is all about preference and my husband has a keen observation about the combo. If you’re into a thinner gravy-like sauce, pair it with a thicker blend of grits. If your taste leans toward a chunkier sauce, blend it with a creamier, looser grit blend.

The few times I’ve made this dish, it sometimes comes out thinner and I have to add a bit more flour to thicken the sauce (I take 1/4 cup of the cooked sauce and add 1 tablespoon of flour to it then blend it in so it doesn’t leave floury chunks), and sometimes I let it cook down a bit long and it thickens up. It’s just one of those things that takes practice to get it exactly how you like it.

Go ahead and leave the tails on the shrimp if you like for a more dramatic presentation, or pluck those suckers off to make them easier to eat with each spoonful. The choice is yours! 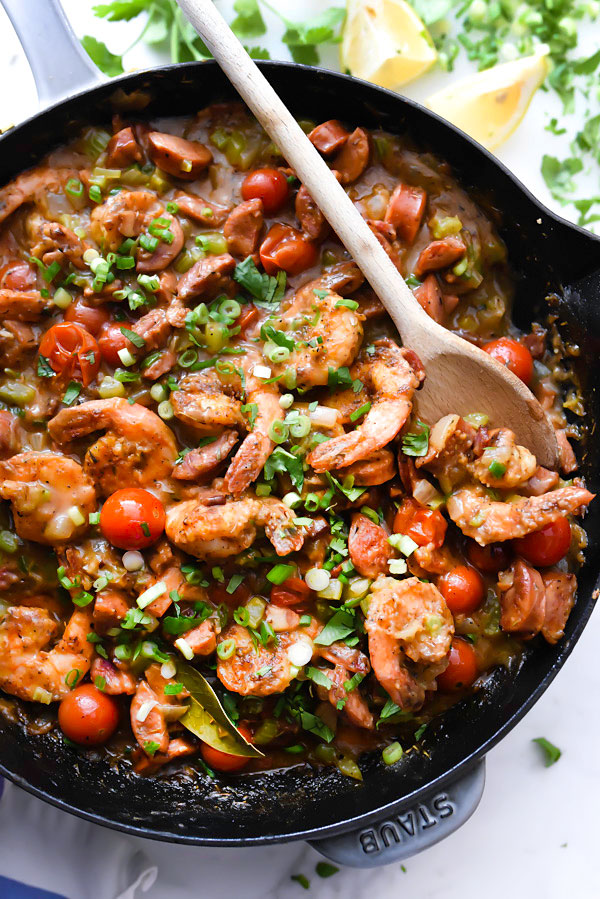 My Favorite Shrimp and Grits Recipe

Don't be put off by the length of this list of ingredients, the prep and cooking method is one of the easiest to pull together once you've read through the steps.

*Add more chicken broth if you prefer a looser gravy. If your gravy is too thin, add 1 tablespoon of flour to 1/4 cup of the sauce in a small bowl, mix well, then whisk into the gravy to thicken it.

This Mediterranean inspired salad, with its smooth

This easy chicken piccata recipe with a tangy lemo

This Mediterranean quinoa salad is packed with hea