An overnight brine of buttermilk and Cholula® Hot Sauce gives a juicy kick to these chicken and waffle slider sandwiches. 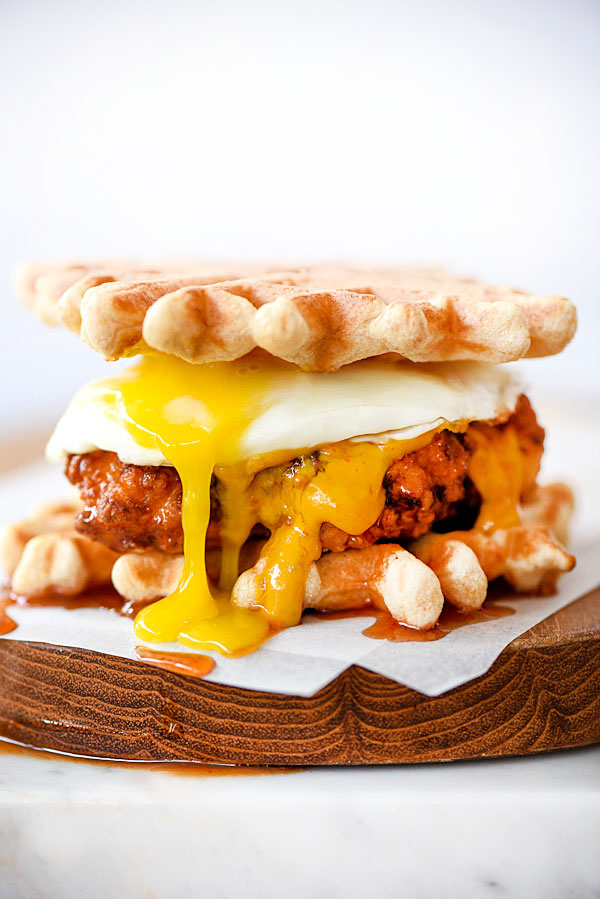 I’m pleased as punch to bring you this recipe sponsored by Cholula® Hot Sauce, because at our house, Cholula hot sauce is probably our most used condiment in the cupboard.

It’s a Southern thing. But it’s taking over mainstream. Chicken and waffles.

The best fried chicken I’ve ever had was from Gus’s Fried Chicken in Memphis, TN. I shared it with my friend Laura straight out of the paper bag on an old picnic table at The Shacks. She’d ordered it for us hot and spicy. Just the way I pretty much like everything.

Then last year, I took the whole dang family back to the South where we hit up more than one fried chicken joint and really went for the gusto with chicken and waffles at Hattie B’s—served only on Sunday.

These two meals are what food memories are made of.

Then we came home. My man couldn’t get that chicken and waffles breakfast out of his head. And ever since he’s been working on perfecting his version.

And today friends, this recipe is it. 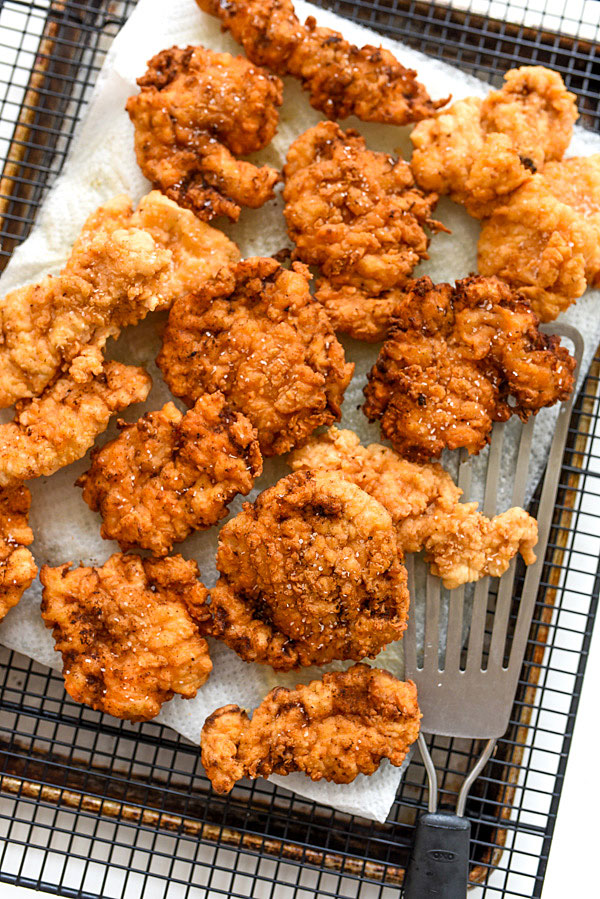 Today we’re talking about chicken and waffles, but in a portable, slider kind of way. Mini chicken burgers if you will. With a little heat, and loads of flavor.

This fried chicken emulates the flavor we had in the South—it packs just a bit of heat. They’re not reach for a glass of milk hot, but just right thanks to the Cholula® Original Hot Sauce mixed with buttermilk brine. 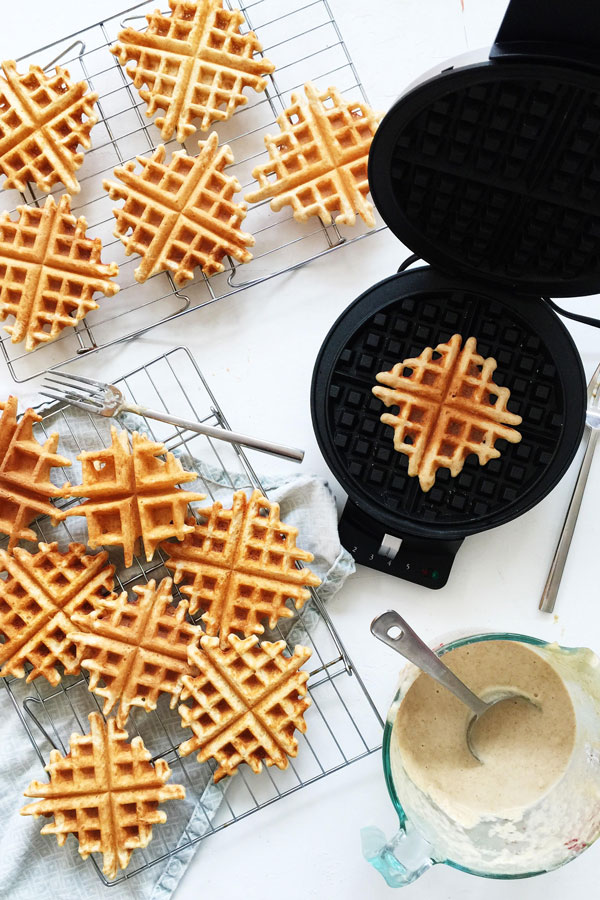 So he had the fried chicken figured out. And I did my part by making the mini waffles. But where our real flavor challenge came into play was in creating the frosting on the cake, er, the sauce on the sliders.

We had four different Cholula hot sauce flavors to play with. And of course he had to “taste test” each one of them with a piece of fried chicken. It’s all in the name of research, right?

On to the sauces… 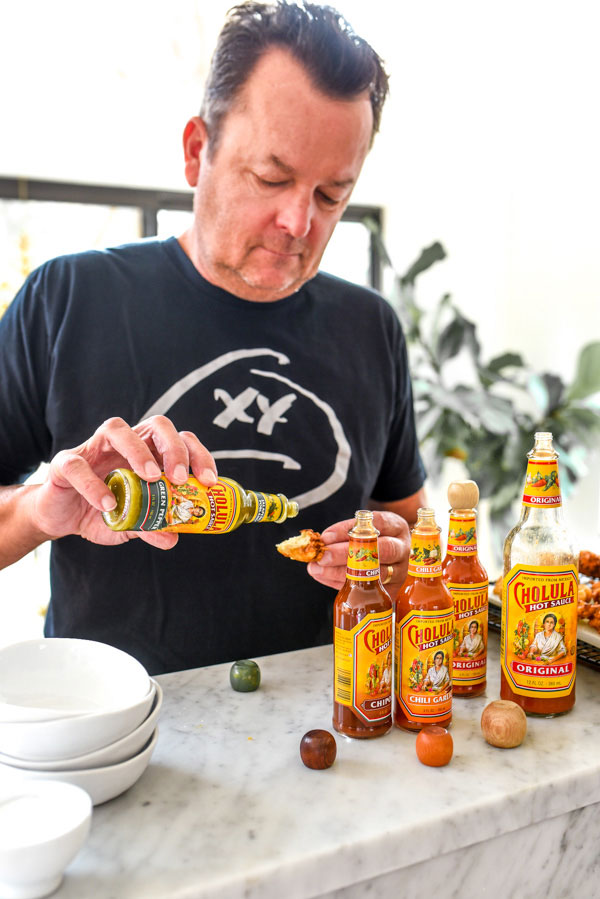 We played spicy with sweet, creamy with heat and came up with four awesome variations that gave each slider its own distinct taste.

“Oh yes. That one definitely brings out the sweetness.”

Cholula Chipotle hot sauce mixed into strawberry jam. Or any jam really. Just think of what an orange marmalade would be like.

Cholula Green Pepper hot sauce gave a bite to Miracle Whip. I know, he’s a fan of Miracle Whip through and through. But regular mayo would work well, too.

“Mmmm. That’s good. But what do you think about adding a bit more? Okay. That’s perfect.” (Guess who’s adding her two cents?) 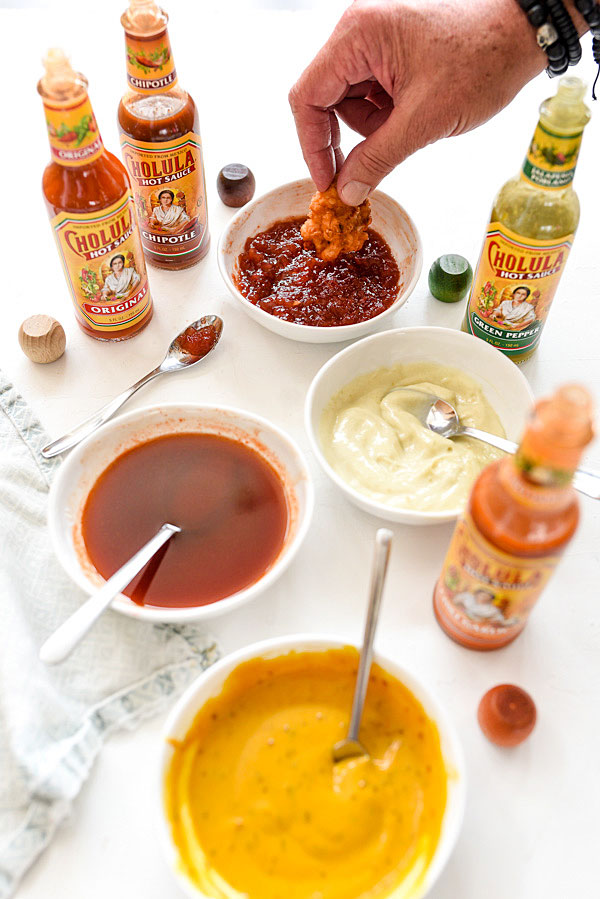 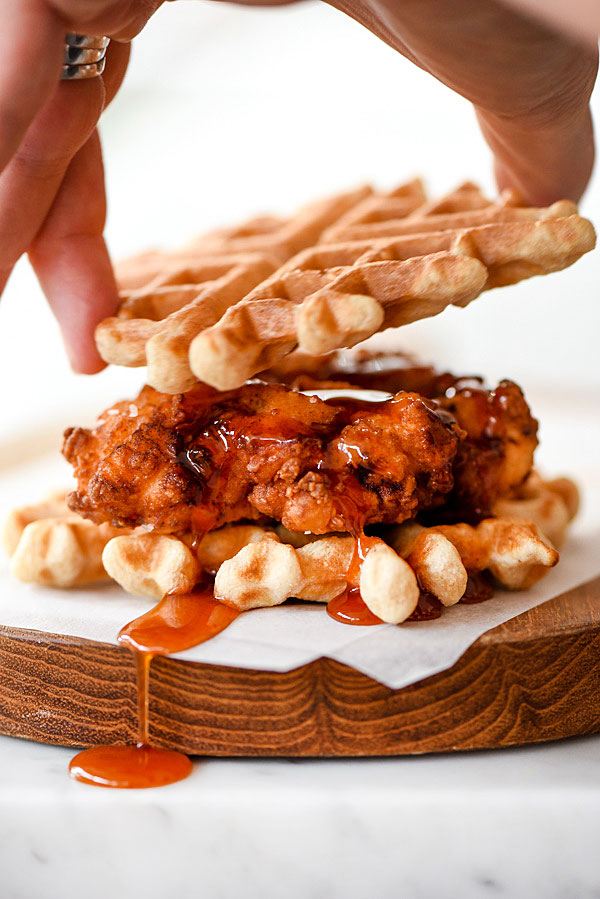 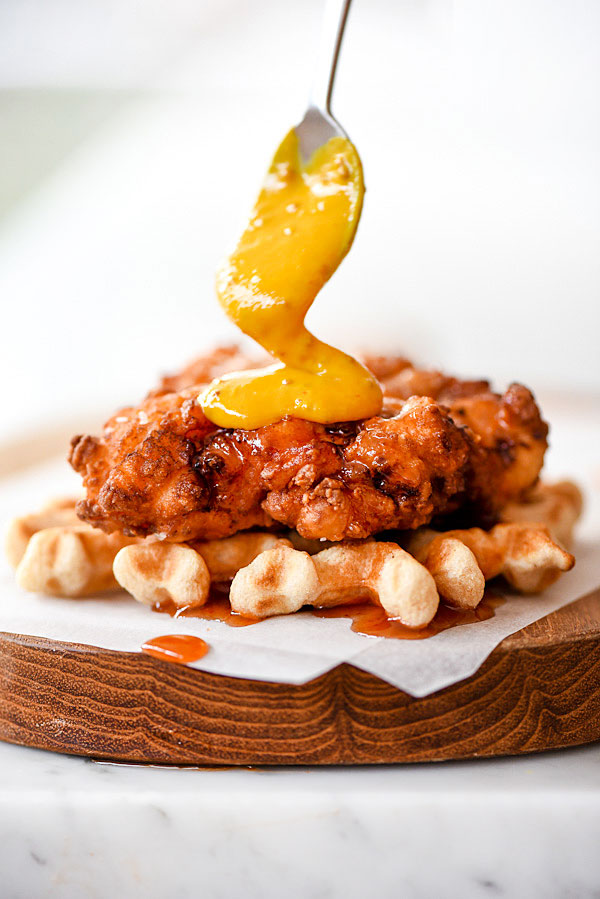 The best part of our little cooking challenge was mixing and matching the sauces on the sliders.

And then he did what every red blooded American man does.

He put an egg on it. 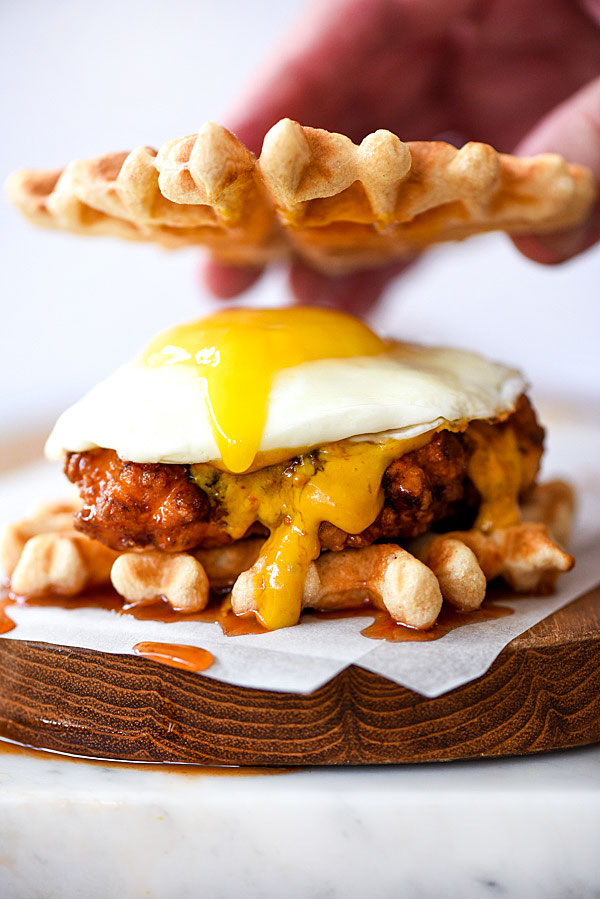 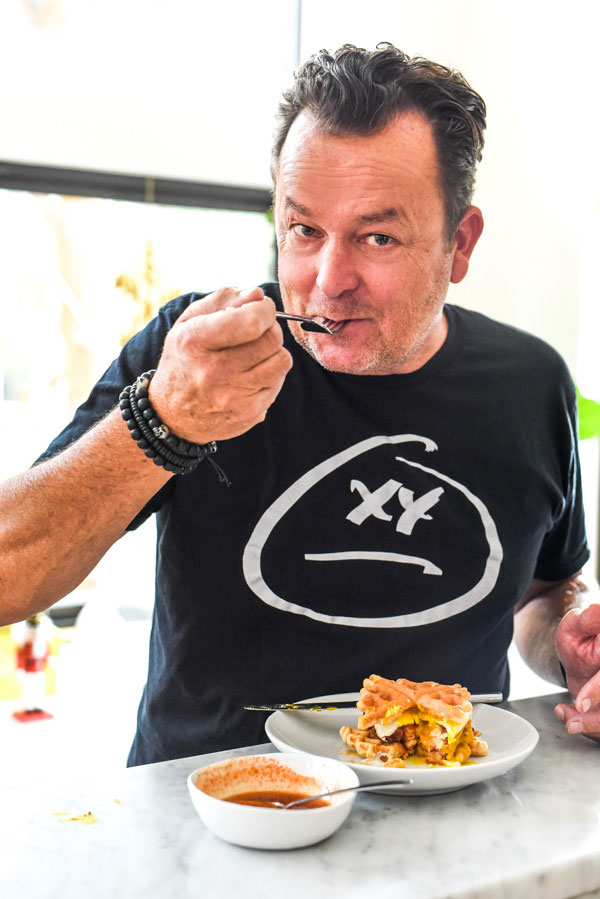 This recipe calls for just 2 chicken skinless, boneless breasts for the whole shebang. My husband butterflies the breasts first then gently pounds them out to 1/4 inch thick. Of course I questioned this, as any wife will do, because it seemed really thin, but he confirmed that is the best thickness because the chicken puffs up when it cooks. Jeff’s tip: When pounding chicken be careful not to rip it apart.

The chicken is brined overnight in a mixture of buttermilk and Cholula Original hot sauce. Then, the reserved buttermilk mixture is used again when flouring the breasts. You’ll want to do this process twice for extra crispy chicken. BUT! Be sure to shake off any excess flour so they don’t become gummy. Jeff’s tip: If flour gets too clumpy, sift out the clumps with a fork or slotted spoon.

After taking the chicken from the refrigerator, let it rest for at least 30 minutes at room temperature. This will make it so the batter adheres best the chicken when frying because cold chicken and hot oil do not mix.

We use a cast iron skillet to fry the chicken in. Canola oil is cheap and works well. Be sure not to overcrowd the pan and cook the chicken in stages, allowing the oil to come back to 375 degrees F between each batch. Jeff’s tip: Keep pans under and alongside the frypan so you don’t drip grease all over the stove.

I used a whole wheat waffle mix for the waffles and originally intended to use my belgian waffle maker but they made the sandwich way too high. Instead, a regular waffle iron works best. For slider size, just a bit over 1/8 cup of batter per waffle works best. If you’d like to make a sandwich size, a scant 1/4 cup works well. 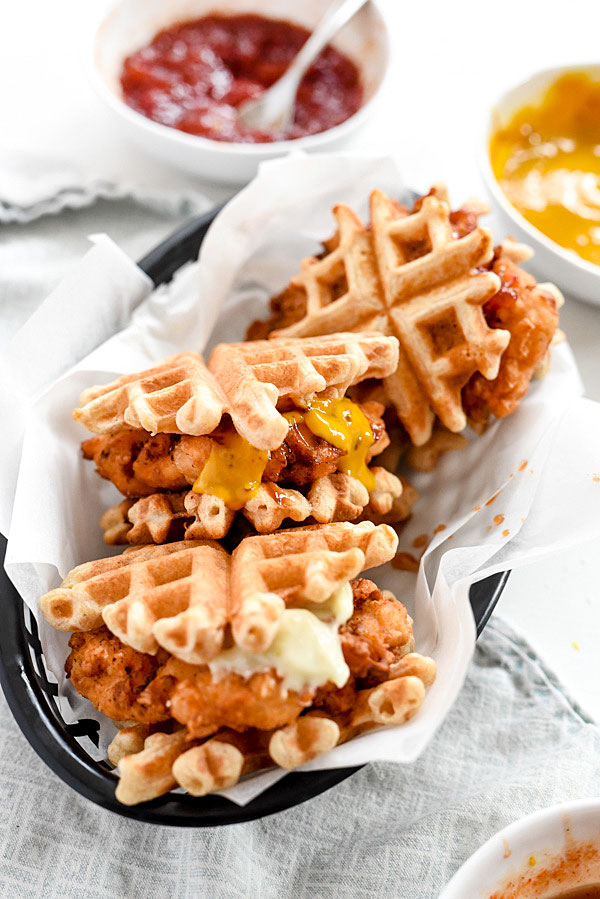 If you make this recipe, please let me know! Leave a comment below or take a photo and tag me on Instagram with #foodiecrusheats and #UncapRealFlavor.

An overnight brine of buttermilk and Cholula® Hot Sauce gives a juicy kick to these chicken and waffle slider sandwiches.

Spicy and sweet, these sauces are the perfect topper or dip for chicken and waffles. If you like lots of sauce for your sliders, double one or all of the recipes. 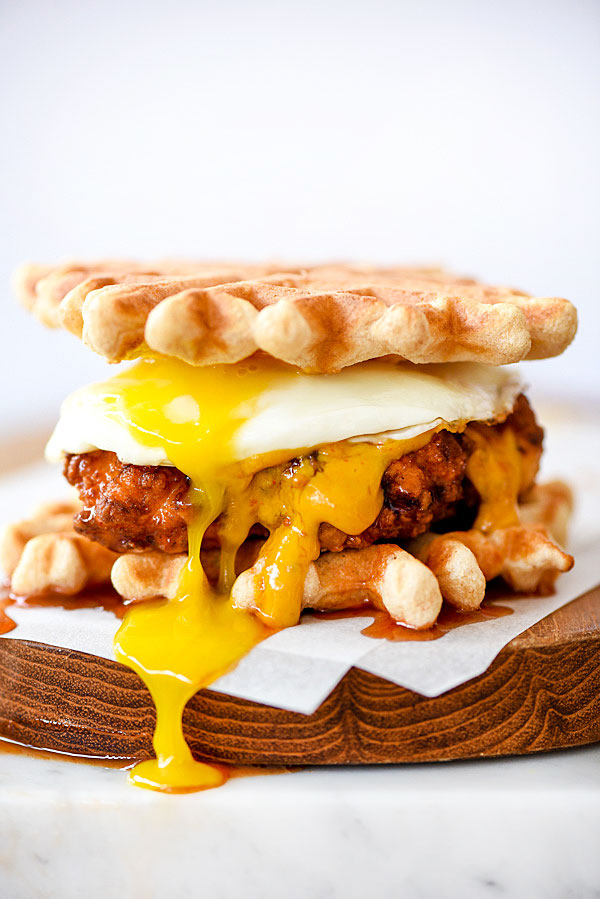 Thanks for stopping by. I hope this inspires you to get into the kitchen and make something good.