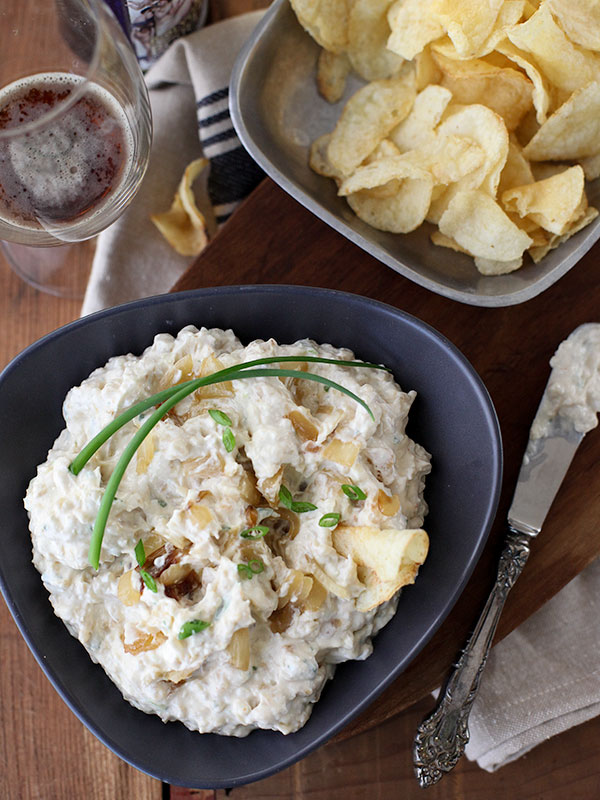 Being deemed The Beeroness—which in drink-speak is similar to bearing the title of  Princess, Duchess or Queen—has plenty of responsibilities that come along with the nobility. Luckily for us commoners in the ways of ale, stouts and malt liquor, we have food blogger and author Jackie Dodd to lead us down a beer-inspired foodie path. And with recipes like her Porter Caramelized Onion Dip, you’ll be bowing down in no time. 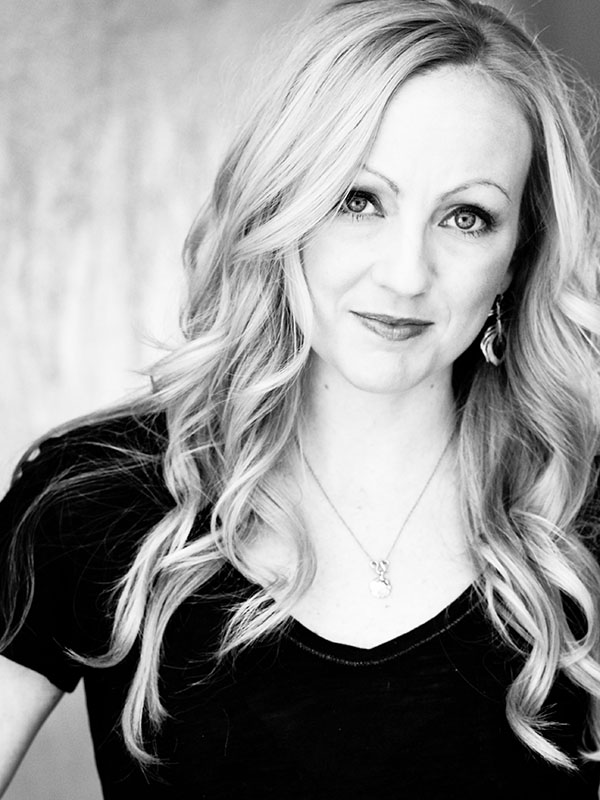 With just two years of blogging under her belt, the lovely Jackie Dodd has made an indelible impact of bringing beer to the culinary forefront through her popular food blog, The Beeroness, where she shares recipes that infuse craft brews of hops and barley into everyday foods.

Sporting the tagline “Have your beer and eat it too,” Jackie focuses on craft beers as the flavor enhancers to recipes sweet and savory and everything in between on her blog and has newly released The Craft Beer Cookbook, 100 Artisanal Recipes for Cooking With Beer.

Jackie’s ambitions as a food blogger didn’t start in the kitchen, but rather with her drive and determination to realize her desires to be a part of the craft beer world.

“I really wanted to be a part of the craft beer community but I didn’t brew,” says Jackie. “So I started to write recipes for the beers I loved, started to take photos of them and it caught on.” 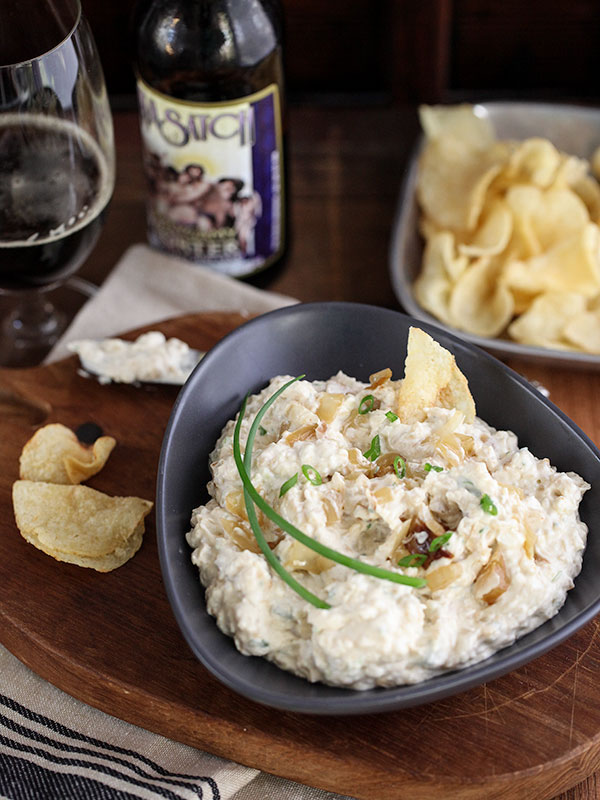 But creating a food blog wasn’t familiar territory for this beer connoisseur.

“I didn’t grow up in a cooking household, no one I knew really loved food,” explains Jackie. “I just wanted to learn so bad. I read a lot, watched a lot of TV and Googled everything. I’ve known Tori of the blog The Shiksa since I was in 4th grade. She was a huge inspiration when it came to starting my blog.” (See more of Tori in “The Ultimate Hanukkah Hostess”  from last winter’s issue of FoodieCrush magazine.)

While she’s always sharing recipes and ale-inspired fusions on her blog, there’s a few things you may not know about Jackie. 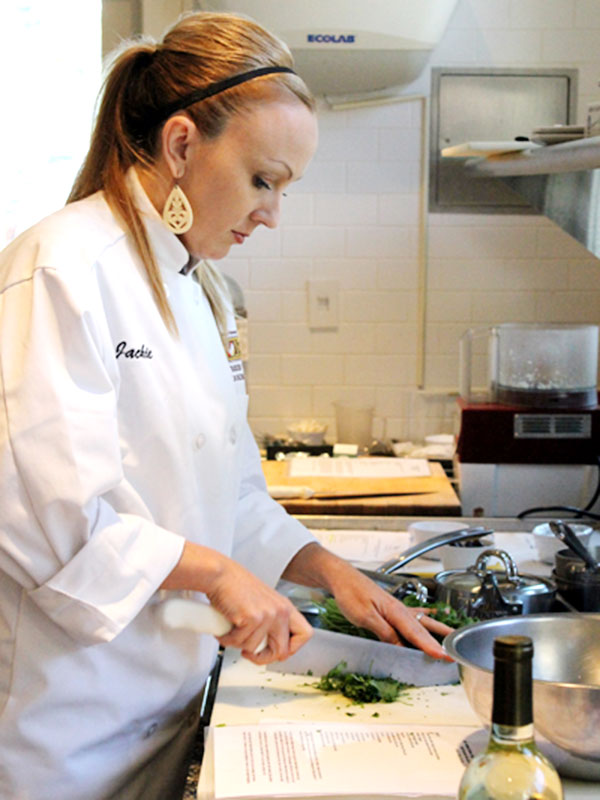 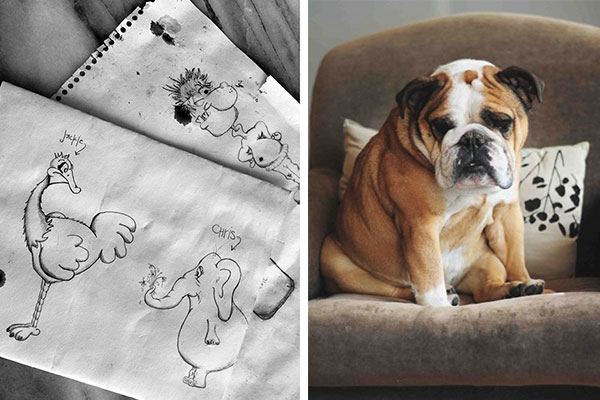 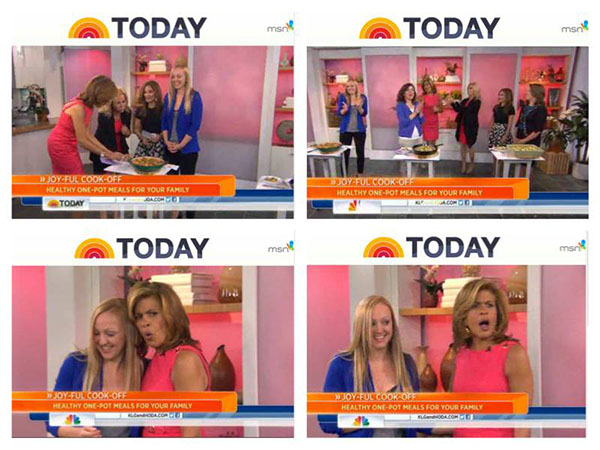 Growing up on a farm as one of seven sisters, one of Jackie’s chores was vaccinating all of the animals. “I even had my own hypodermic needles starting at the age of 11,” she proudly declares.

Jackie has a masters in Psychology. There you go, point proven: Beer makes you smart.

Jackie can draw cartoons and used them as a way to connect with a pretty rough crowd. ”Fresh out of college I got a job teaching anger management skills to gang members (they were ages 11-18) and teaching their caregivers parenting skills. I loved it, and never felt scared.” Here is a story about it.

Her dog Sophia is just as much a part of the family as her toddler daughter and husband and has been all over the world with Jackie. I may love her even more for that.

She’s cooked with Hoda and Kathie Lee on The Today Show and has shown the folks in this CBS News clip a thing or two about cooking with beer flavors. Watch your back Rachel Ray. 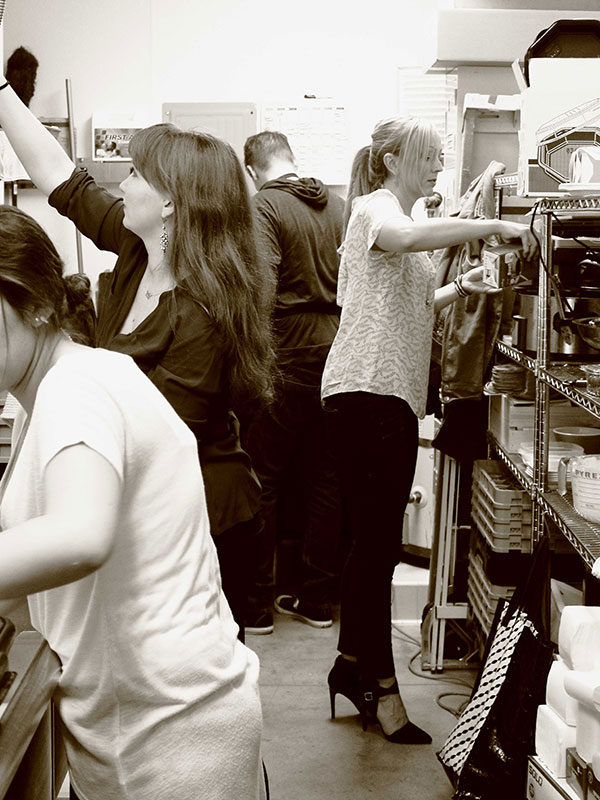 I’m thrilled to have Jackie share a little bit more about herself with this interview. Cheers to Jackie for being our foodie crush!

2. If you could be one food blogger other than yourself, who would you be?
Naomi from Bakers Royale. Her photos make me want to cry and her food makes me want to binge eat myself into a diabetic coma. And she’s super gorgeous.

3. Which 3 blogs do you follow/are obsessed with/can’t live a day without?
Savory Simple, her photos are so stunning and I trust her recipes 100%.
OC Beer Blog, I adore the way Greg writes, always inspiring and hilarious.
Brave Tart, she’s a CIA trained baker and has tons of baking wisdom.

5. What dish are you obsessed with mastering that you just can’t get quite right?
Gnocchi. I’ve had some fantastic, light, pillowy, starchy bowls of awesomeness, none of which have come from my own hands. I can make “good” Gnocchi, but I want to make that carbtastic stuff of dreams.

6. What did you have for dinner last night?
Roasted vegetables, quinoa and avocados. I eat a lot of crap (and by crap I mean really delicious, high calorie stuff like beer, and chocolate, and doughnuts) so I go through these phases where I just want to eat vegan food for days. It helps with the balance. And the skinny jeans.

7. What’s one secret talent outside of the kitchen nobody knows about you:
I can draw cartoons. I don’t ever do it anymore but when I used to work with kids it was a great ice-breaker (I taught anger management skills to gang members in South Central LA right out college).

8. You’re happiest when cooking/eating:
Homemade pasta. I don’t always have time to spend on making homemade pasta, so when I can spend all day making cavatelli from scratch for a group of people I love, that’s a good day.

9. You have a lot of irons in the fire with a blog, book and stock photography site. How do you balance it all and keep it flourishing with new and innovative recipes?
A healthy amount of self-loathing. No matter what I’m doing, I just keep wanting to be better at it. I don’t compare myself to other people that have been doing it for 2 years, like I have, I compare myself to people who have been doing it for 20. It’s frustrating, but motivating. I also read a lot. I love Cooks Illustrated, and right now I’m reading The Brewmasters Table by Garret Oliver.

10. The one secret ingredient to your success is:
Beer. Is that too obvious? Not just to cook with. As a community craft beer people can’t be beat. A lot of what I’ve been able to accomplish is a direct result of the support, motivation and encouragement I’ve gotten from the craft beer community. 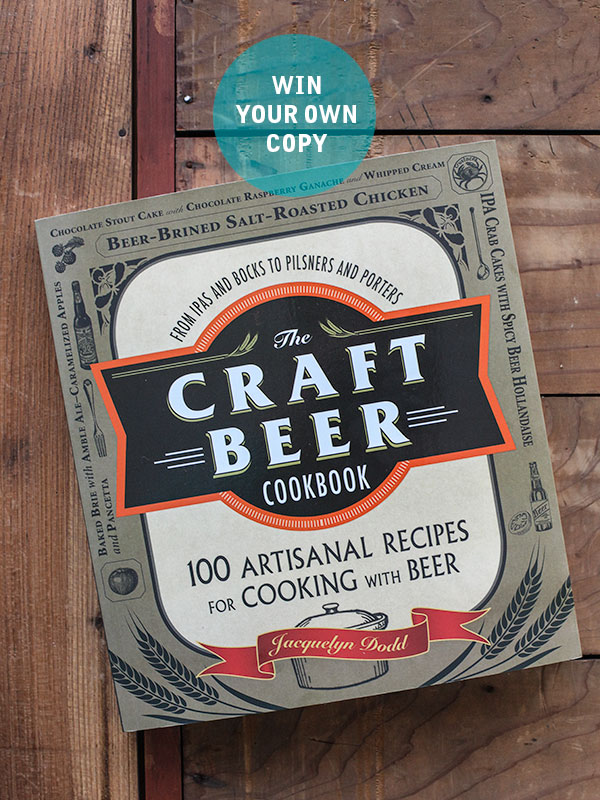 Jackie’s cookbook  The Craft Beer Cookbook, 100 Artisanal Recipes for Cooking With Beer is full of great beer-infused recipes, and you can win a copy for your own cookbook shelf.

My own copy of Jackie’s cookbook is tattered with post-it notes, and I had a devil of a time which to share with you today.

Should I try the Chocolate Stout Cake with Chocolate Raspberry Ganache and Whipped Cream? Or maybe Beer and Butter Prawns? And how can you go wrong with Slow-Roasted Maple Stout Baby Back Beef Ribs?

Oh my word. Where to start? 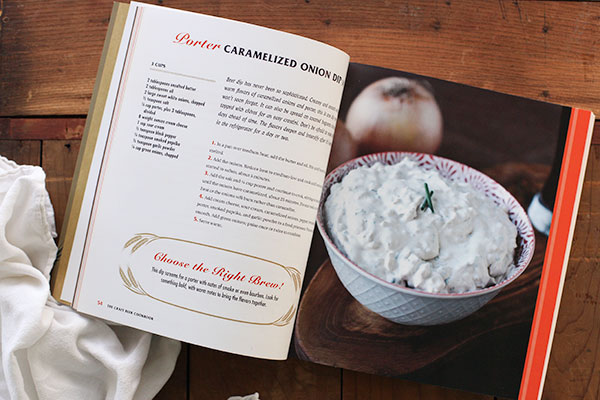 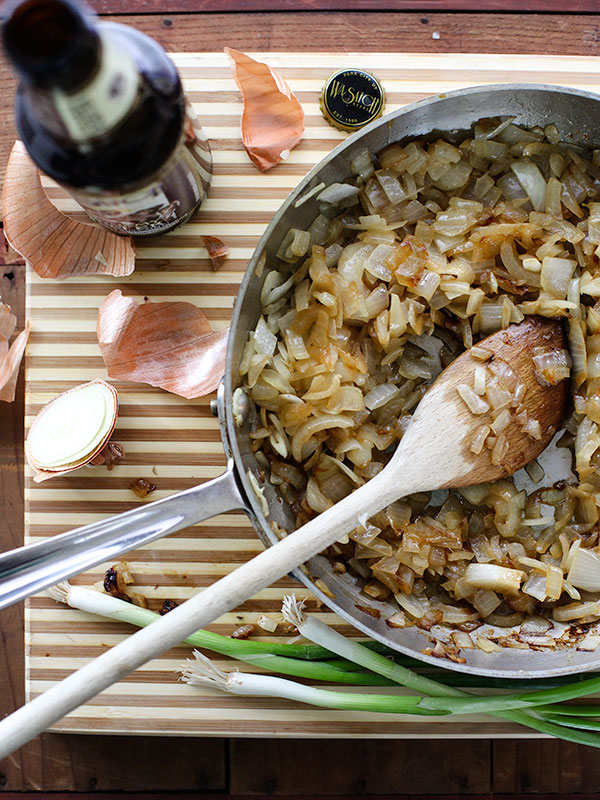 How about here. With an appetizer that is perfectly infused with the flavors of an award winning, classic Utah craft brew: Wasatch Ale’s Polygamy Porter. Just because we’re from Utah doesn’t mean our brewmasters don’t have a sense of humor.

Caramelizing onions in this classic Porter brew adds a deep malted flavor to the dip, perfectly appointed for a tailgate party, elegant holiday affair or just to have on hand for the morning toasted bagel.

Jackie’s notes mention the dip’s flavors deepen after being in the refrigerator for a day or two. I gave it a try and yes, it was still totally tasty.

After sharing this Porter Caramelized Onion Dip with some of the neighbors and getting rave reviews, it was a given that it’s going on my recipe repeat list to be made again and again. 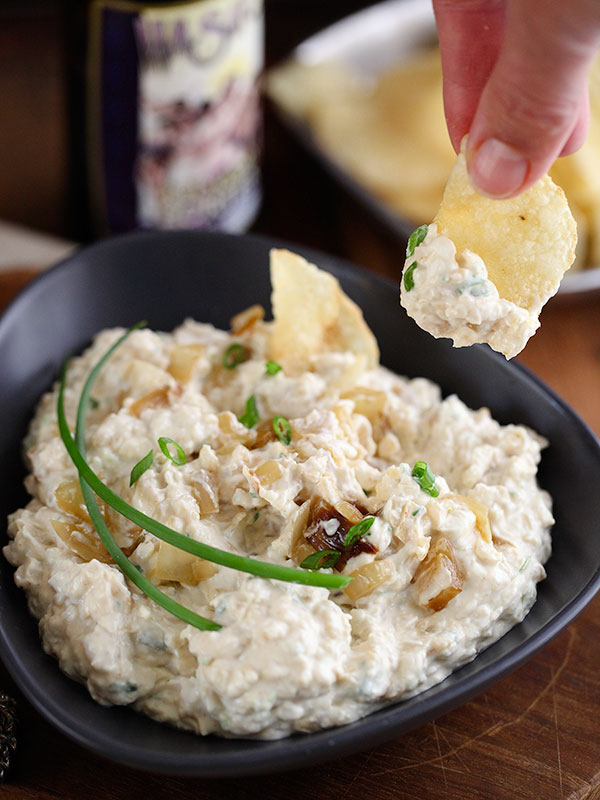 reprinted with permission by Jackie Dodd

Thank you again Jackie, can’t wait to share a drink with you again soon. Best of luck to you guys on the giveaway.