This easy split pea soup gets it’s depth of flavor from sautéed carrots, onion, and celery cooked in a simple broth with smoky ham. 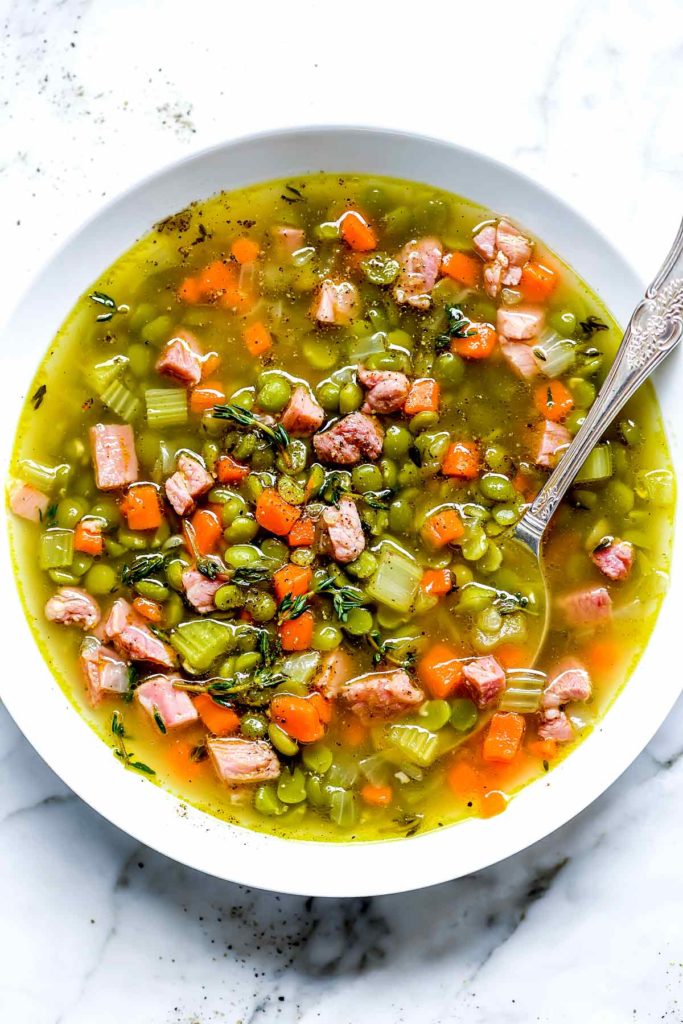 When it comes to cooking soup, being flexible with ingredients and technique is where cooks like me really shine. In soups, precise measuring can be tossed out with the carrot tops and subbing one ingredient for another is perfectly acceptable. It’s where meals like this split pea soup are put in the category of unfussy cooking, while gloriously fulfilling their promises of nourishment and comfort in the most understated ways.

The backbone of this split pea soup recipe comes from my mom, which I find highly ironic because 1) She never made it for us as kids, and 2) She hates peas. But somehow this easy soup has become part of her repertoire, and something she makes for herself and my dad whenever she has leftover ham.

So when I found myself with chunks of leftover porky goodness and a well-stocked pantry that included split peas, my mom’s recipe for split pea soup was where I turned first. 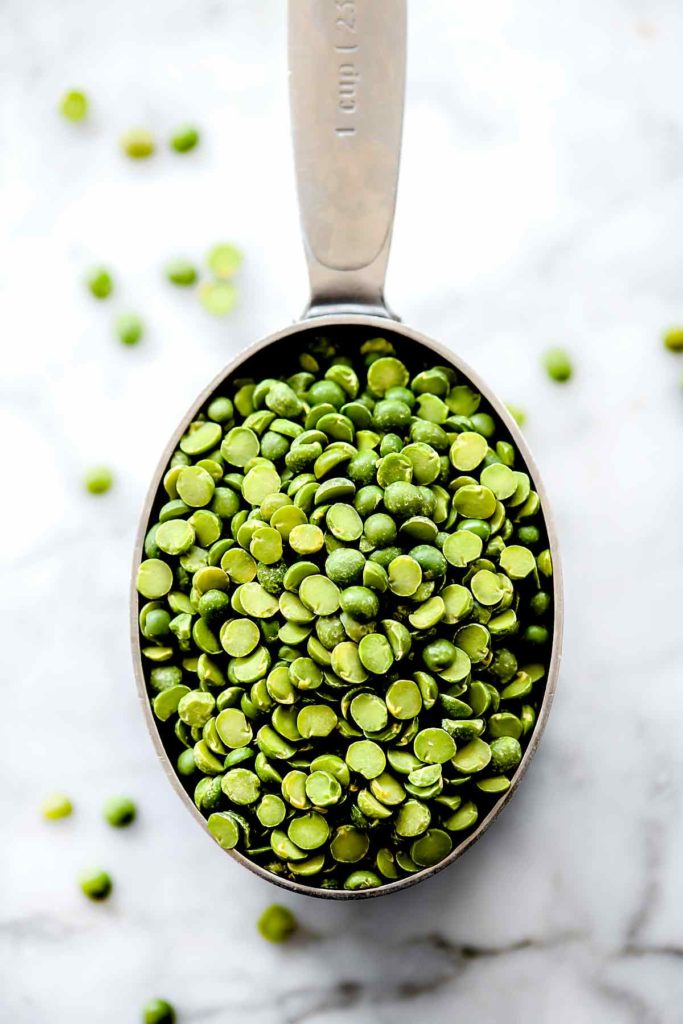 What Are Split Peas?

Are split peas the same as regular peas? No, and you can’t be thinking that drying out regular peas will get yourself a split pea.

Split peas are dried legumes known as field peas that are grown for drying. They are hulled or shelled, then split in half and dried. This process means split peas do not need to be pre-soaked before cooking. Depending on how long they’re cooked, split peas will hold their shape or with longer cooking times, become soft and creamy. 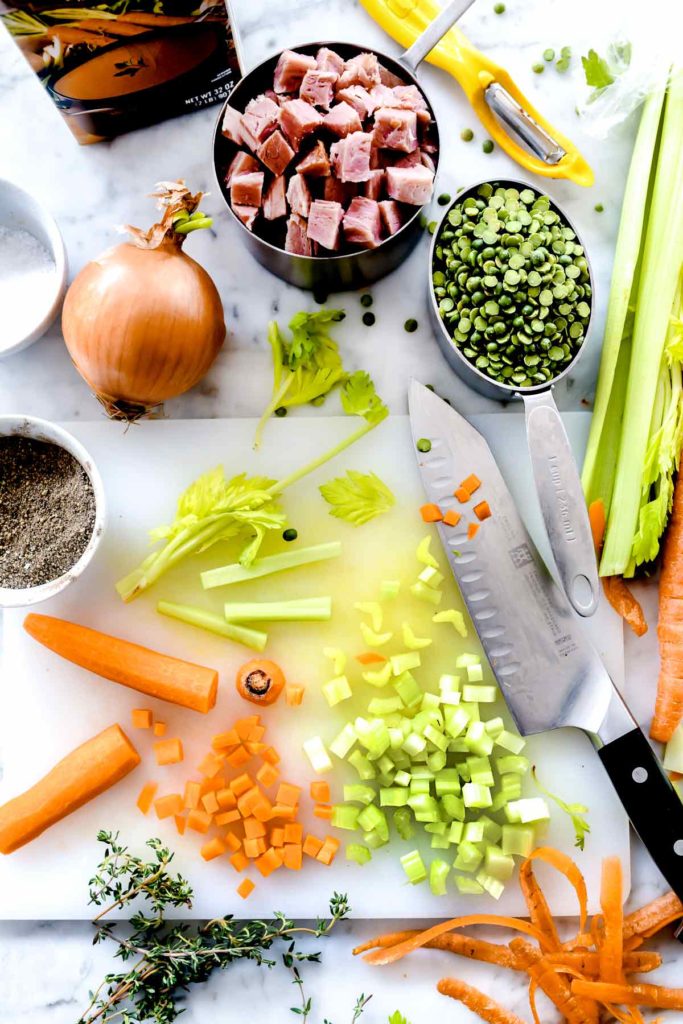 What’s In This Soup

It’s likely you’ll have everything you need for this soup right in your fridge and pantry, minus perhaps leftover Easter or deli ham plus the bag of split peas held in case of emergencies. 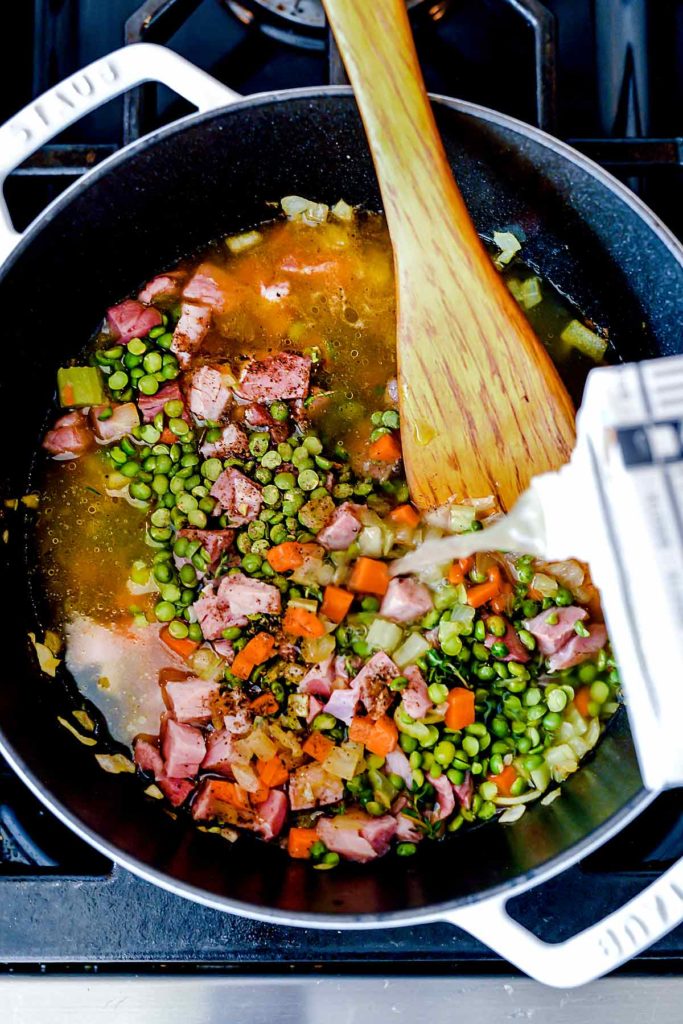 How to Make Split Pea Soup with Ham

This recipe is super easy to make, but does take about an hour to cook for a brothy soup, or another 30 minutes longer for a creamy soup.

Prep and cook the mirepoix. In French cooking, carrot, celery, and onion are known as a mirepoix. The three vegetables are chopped to the same size then slowly cooked in butter or oil to develop their inherent sweet flavors without browning or caramelizing them. This step is what truly infuses the soup with flavor and shouldn’t be rushed.

Use chicken broth plus water for the broth. Instead of using only chicken broth for this soup, but I like adding a bit of water to dilute the heavy chicken flavor so the vegetables can shine.

Add the chopped ham and the split peas. Chop the ham in similar sizes to the vegetables so you get equal representation with each and every bite. If using a ham bone instead of chopped ham, add it with the broth and water to infuse the soup with depth of flavor.

Add the seasoning—but watch the salt. I like a lot of fresh thyme leaves in this soup. If fresh thyme isn’t an option, use half the amount of dried. Because ham is salty, and so is regular chicken broth, be wary of adding too much salt, and taste as the soup cooks before adding more salt. 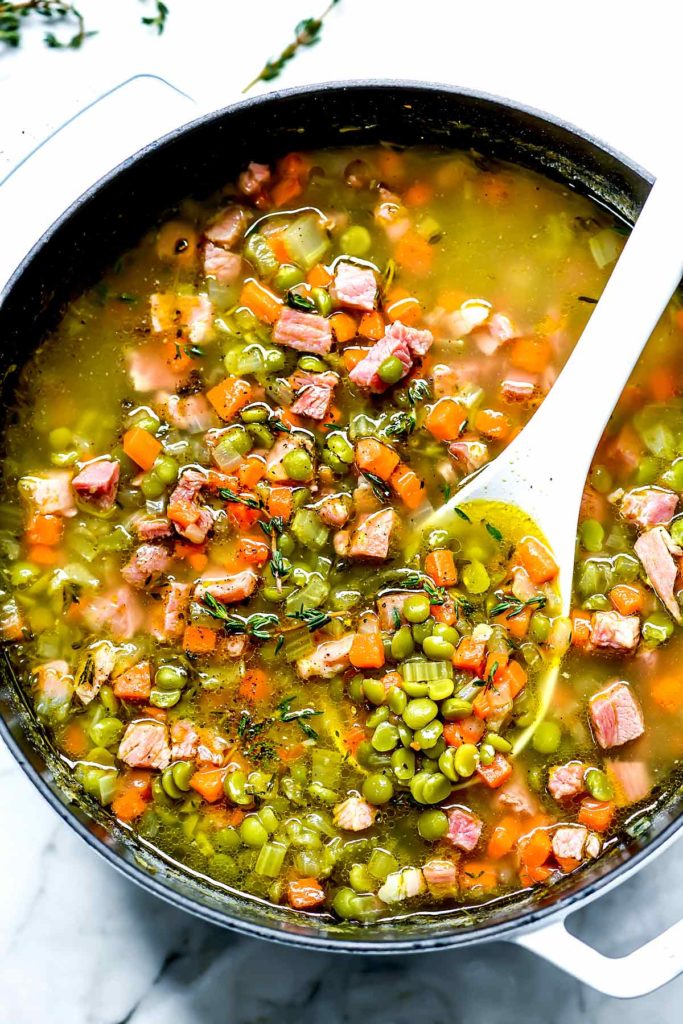 How Long to Cook this Soup

Split pea soup can too often become a sludge fest: Too creamy, too thick, and too pasty. While I love a creamy soup like clam chowder, I prefer my split pea soup mid way between broth and cream, and stocked with chunky bites.

Depending on how you prefer your soup will determine how long to cook the soup.

For a brothy split pea soup, cook the soup for 1 hour. The peas will remain mostly intact, and while soft, will still retain a bit of bite.

For a creamier soup, cook the soup longer, for 90 minutes or a bit longer, so the peas break down.

How to Thicken Split Pea Soup

If you like the soup thicker, there’s a few options to make it so:

To make split pea soup in the crock pot or slow cooker, cook the carrot, celery and onion in a saucepan or skillet as directed then add with the rest of the ingredients to the insert of the crock pot, cover and cook on high for 4 hours or low for 6 hours.

How to Make Split Pea Soup with a Ham Bone

If you like your split pea soup with the ham flavor but not the chunks, make this soup with a ham bone instead of chopped ham. Add the smoked ham bone with the split peas and cook as directed. When done cooking, remove the ham bone from the soup and remove any meat from the bone. Add the meat back to the soup and discard the bone. 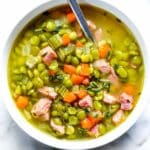 This easy split pea soup gets it's depth of flavor from sautéed carrots, onion, and celery cooked in a simple broth with smoky ham. Use leftover or deli ham, or try a ham hock or ham bone instead. 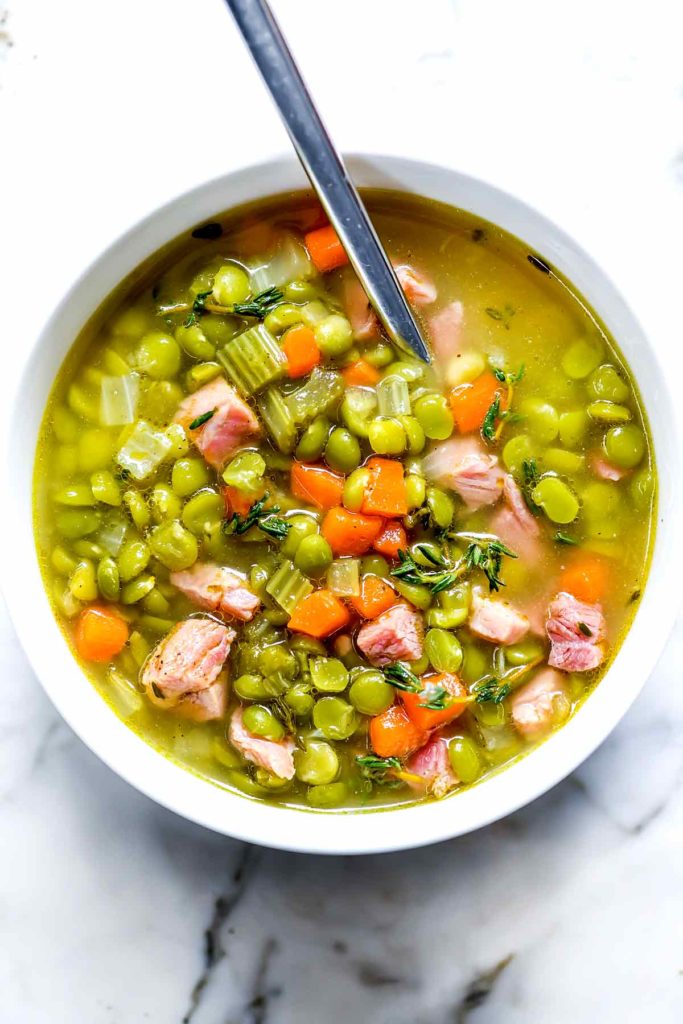 I am so ready to make a run for Mexico, but until

This pan seared citrus shrimp and avocado salad is