Although he’s officially handed over the reins, 82 year old farmer Bill Rempp still continues to work alongside his son Kevin on the 1,200 acre family farm in central Iowa, better known as the heartland of America. And some days—when he’s lucky—you just might find his 6-month-old great grandson, Will, in the bucket seat next to him. 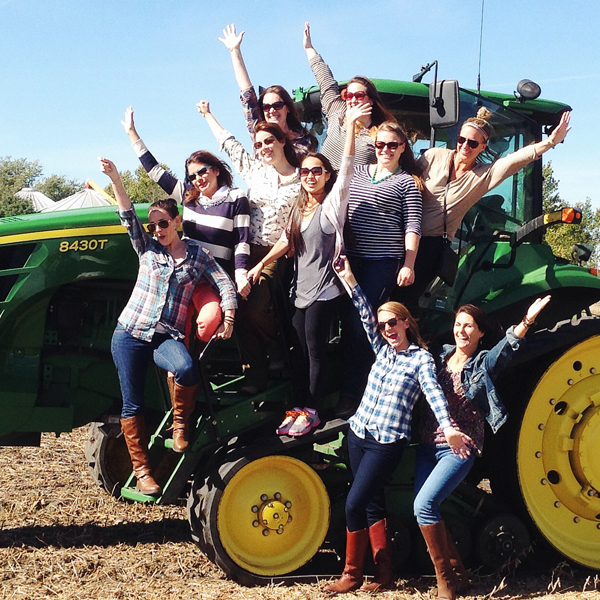 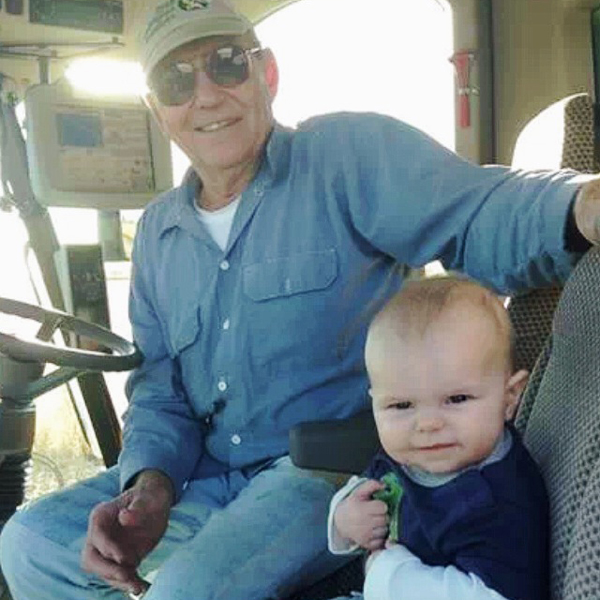 Will is poised to be a seventh generation farmer in the Rempp family tree and his great grandpa proudly shared this photo with me.

I was one of several invited food bloggers who traveled to Des Moines, Iowa to learn about Iowa corn and farm-fresh foods from farmers like Bill Rempp on the annual Iowa Corn Quest Tour sponsored by the Iowa Corn Growers Association.

I’m an inquisitive sort, so meeting food producers and getting to know more about where my food comes from is one of my favorite parts of this job. I think everyone can admit that there’s room for improvement when it comes to transparency in food and agriculture. And happily, that same belief was one I heard from the farmers themselves.

Doesn’t most everyone who isn’t a farmer have an idyllic take on what living on a farm would be like?

Here’s mine: Waking up in the morning to a crooning rooster then gathering farm fresh eggs to cook in a perfectly seasoned cast iron skillet on an old gas stove while the kids run out to feed the horses and play fetch with the dog as they all jump wood-hewn fences and I peer through sun-kissed curtains at the ducks cavorting in the freshwater stream.

At least that’s what my farm would be like. Isn’t that what farm life really is like?

Umm, yeah. No, no it isn’t. Damn that Old MacDonald. 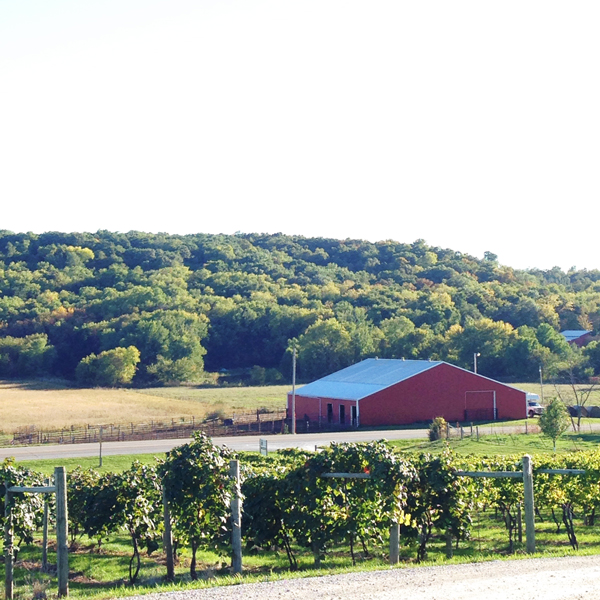 Many American farms started off as grass-root operations where the family business was handed down from one generation to the next,where business was sealed with a handshake and the good old boy code of ethics. Some of the farmers I talked with were on their SIXTH generation of farm holding.

But in the ‘80’s and 90’s, farming lost it’s luster for many children of the family farm who left it for seemingly brighter pastures and the promise of fortune and big city lights.

Today, that trend seems to be changing. 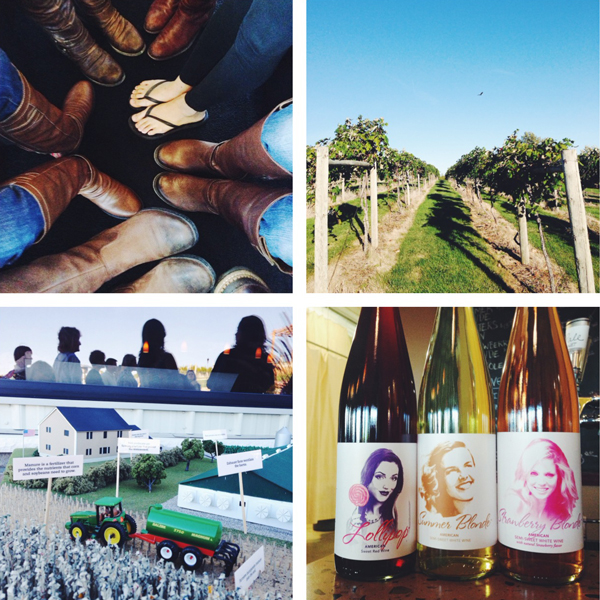 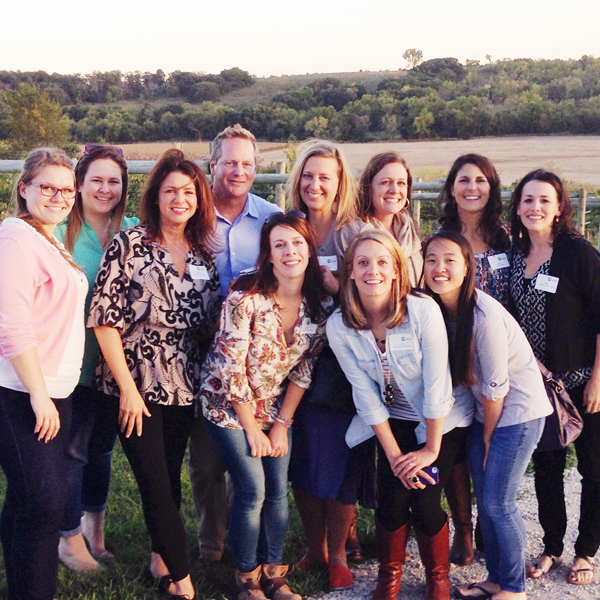 Our dandy group of Iowa Corn Quest food bloggers visit Madison County Winery, back row from left to right: Megan of Country Cleaver, Jessica of The Novice Chef, Sandy of Reluctant Entertainer, our host from Madison County Winery, myself, Annalise of Completely Delicious, Sheila of Eat2Gather, Nikki of Seeded at the Table. Front row: Sommer of A Spicy Perspective, Lauren of Climbing Grier Mountain, and Chung-Ah of Damn Delicious.

Over the past year, the farmers I’ve met are the children and grandchildren of the farm’s founders. They’re a new breed of farmers who are actively creating their own brand of the idyllic farm. They’re devotees of the lifestyle that courses through their blood. They’ve returned to the homestead after pursuing high level college degrees in agriculture, animal science, business and even law and have had careers outside of farming.

The day of the farmer dressed in dusty overalls who drags his rusty tractor across the fields has been replaced with a polo-shirted, designer-jeans wearing (most likely still dusty), credentialed business man — and women !! — who does just as much time analyzing spreadsheets and purchasing high-tech equipment as pushing and pulling dirt in the ground.

97% of U.S. farms are small, independently run, family farms. They are the remaining 1% of Americans who produce the majority of the food supply for the world. They aren’t big, faceless corporate machines churning out our food supply like robots. Rather, they’re real people who on average each feed about 155 people worldwide. And to think In 1960 that number was just 25.6.

These family-run farms produce 90% of the world’s largest export, and for Iowa farmers, that means American corn is the cream of their crop. 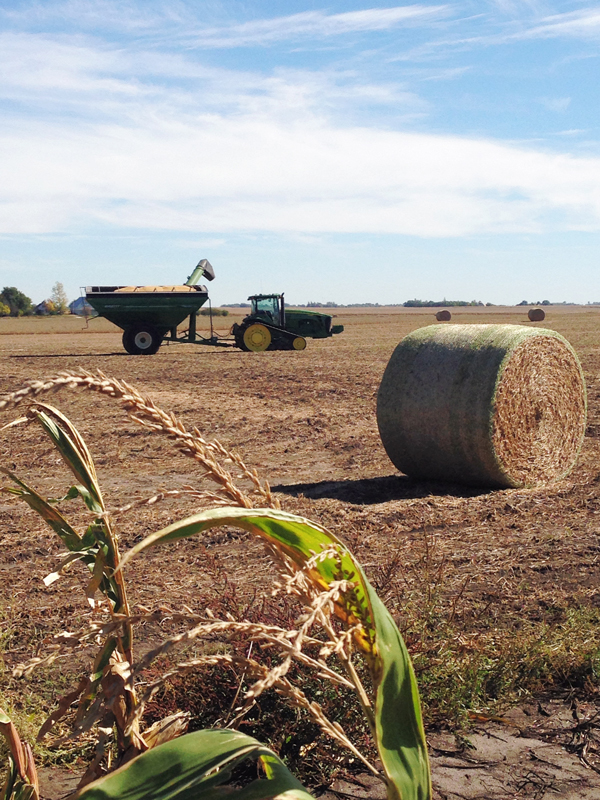 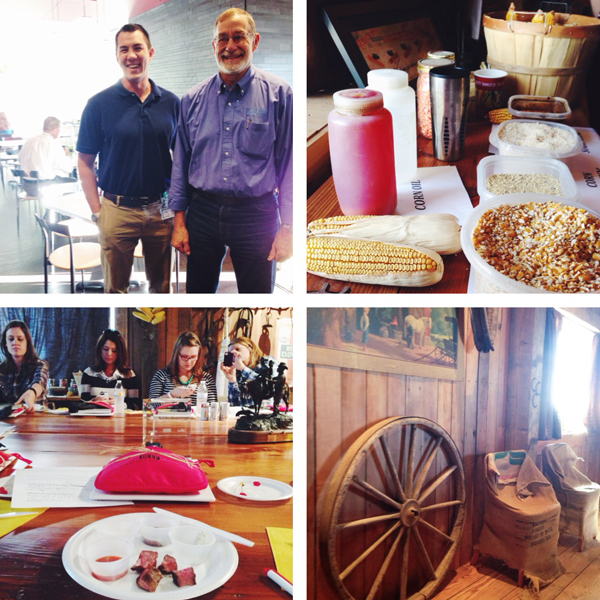 While traveling the roads of Iowa, one quickly learns that bounty of corn in the surrounding fields on every side is not the sweet, tender kernels I crave on my cob come 4th of July. No, this corn is work horse corn. It’s corn that serves a bigger, worldwide purpose. While I’m sure you’re aware of it’s use for high fructose corn syrup (I know, I know…even the Mayo Clinic agrees everything is best in moderation), it’s also used to meet the demand for stuff like sheet rock, cornstarch and plastic. Iowa corn also makes 25% of the country’s supply of ethanol, twice as much as any other state and studies show that without ethanol Americans would pay 20 to 40 cents more per gallon of gasoline at the pump.

But as this last 1% of the U.S. population that is willing to farm, the people who work 12-15 hour days, 365 days a year, to the will of the unpredictable force of Mother Nature, pesky pests and virulent disease, not to mention the disparity between dwindling income and soaring expenses, being a farmer really comes down to two things: It’s not an easy job and only the few will get rich doing it. 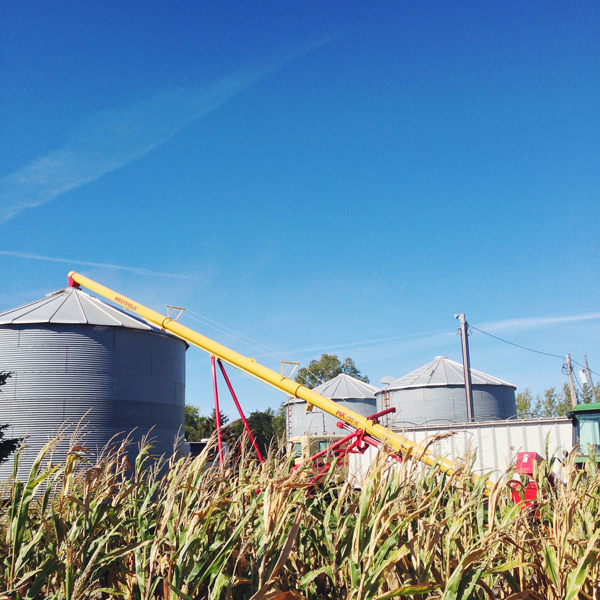 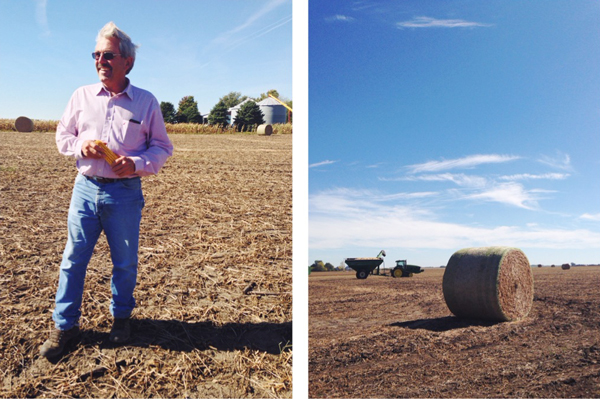 While the number of farms in the U.S. has decreased, the demand for agricultural resources has increased worldwide. Combine that with the graying of the farm population (the average age of a principal farmer increased from 54 years old in 1997 to 57 years old in 2007, source) the advances of farming technology and the efficiencies it creates has become essential to the survival of farmers like Rempp and cattle farmer Bill Couser.

Fifth generation cattle farmer Bill Couser of Couser Cattle Farm in Nevada, Iowa, heads a cattle finishing farm where pasture-fed heifers are fed corn to “finish them” before being sold at auction. Couser explained to our group of bloggers how growing the feed … to feed the cattle … who in turn feed the crops with fertilization … and “completes the cycle” … is not only more efficient but better for the environment and makes farmers more profitable.

Like most Iowa farmers, Couser lives near his farm and fields and takes great care in protecting his family, his community and his crops by integrating environmental practices. As a recipient of the National Cattle Man Association’s Environmental Stewardship, Couser uses less chemicals today because the corn and soybean seed he grows is more resistant to disease, root problems and bugs because of genetic modification.

Before my trip to Iowa, I never actually investigated how or why genetic modification is good or bad, I’ve only listened on the sidelines to the controversy. However, when I did hear discussion surrounding GMO’s, I always pictured a scientist in a white lab coat injecting super growth syrums or the like into seeds kept in a petri dish to produce a super celled seed.

I’ve watched the X-Files on TV, I know how this stuff can turn out.

But as Couser explained, TV, movies and even the news don’t always depict the whole picture. “It’s like when a Norwegian and a Hungarian mate. You take the characteristic from the male and transfer it to the female.” To do this with the seeds of corn, he and other farmers plant 6 rows of female plants to 1 row of male plants. He explained that the pollen naturally drifts from the male plant to the female and creates cross genetics. Nature does the work, the corn is picked in the husk and used for seed.

While crops are at the heart of the genetic controversy, with both sides in contention about effects on the environment and nature, I encourage everyone to do their own research rather than relying on 15 second news blurbs, press releases or statements from paid authorities on either side of the regulatory aisle. Even this post is just the start of my education on the subject.

The best way to ensure that our food and the environment is being treated right is to take advantage of opportunities to get to know the farmers. Visit their farms or chat them up at farmer’s markets and co-ops. Talk to your local chefs or grocery store food buyer and get their thoughts. Consider what your friends have to say. But also consider giving one-sided opinions, both in person and in the media, a lighter weight of authority until you do your own due diligence about your preferred food sources.

And of course, when in doubt, you can always grow your own food.

There is one thing I do know: American’s love convenience. I look at this blog as my job to show people that eating good, home cooked food, as often as possible, can be just as convenient and easy as eating the other side of the sandwich.

“We all want to be in touch with our food when it’s convenient, healthy and whole but if I need to grab a quick lunch at Wendy’s, I will.” Courser says.

For more reading and viewing, consider:

Unearthed: Where Supporters and Opponents Agree on GMOs

GMO’s: What Is and Isn’t True

As always, thank you for reading. The Iowa Corn Growers Association payed for my traveling expenses.  I was not compensated for writing this post; and as always, all opinions are my own.

These easy stuffed bell peppers are made without r

I am so ready to make a run for Mexico, but until